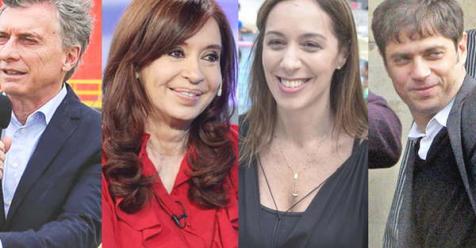 A "confidential" poll by Aresco consultant, Julio's and Federico Aurelio's company, related to Peronism, but the measurement of change, show the numbers of concern in the judgment.

It reflects a very similar scenario for the presidential one, but with Cristina Kirchner on Mauricio Macri. For the Buenosaire government, Maria Eugenia Vidal continues to lead, but with Axel Kicillof quite blocked, who was not released but traveling to the province by order of his CFK chief.

The paper by Clarín begins with the evaluation of Macri's and Vidal's efforts. Both have more negative than positive: the president disapproves 60.4% and the governor 53.3%. The weakest point of the government, as shown by the paper, comes with the economy: for 45.9% the situation is "very bad" and 27.8% "bad" (73.7% among them). The positive aspect ("good" and "very good") barely exceeds the 22 points together. As a consolation, Macri's negative aspect reached a maximum of 78.9% in August.

The number of intentions to vote for the stage and the first round is similar: Cristina indicates both, 31.9% and 33.3%; Macri is still blocked, with 30.7% and 32.6%. This small advantage of the leader Unidad Ciudadana was given by his own ascension and a decline of his rival. Thus, he managed to get Cambiemos to account for the first time in several months.

With regard to the rest of the offer, in the primary scenario, both Sergio Massa and Juan Manuel Urtubey (the two PJ federal variants) recorded a slight decrease over the previous month and stayed away from the top.

As for the ballot, there is something similar to the one in Paso and the first round. Crossing the trends of Cristina and Macri (rats and descents) makes the former president peak, very little: 39.3% to 38.8%.

Finally, the poll proposes an electoral scenario for the Buenos Aires government, where Vidal's preponderance and the potential of former Minister Axel Kicillof are confirmed. It is the one that could make the best use of Cristina's support as a partner on the ballot.

In response to the question of who is their preferred candidate for the governor, 38.8% of respondents answered Vidal. Very close, with 35.4% showing Kicillof with CFK support.