The galaxy fountain, seen in glory 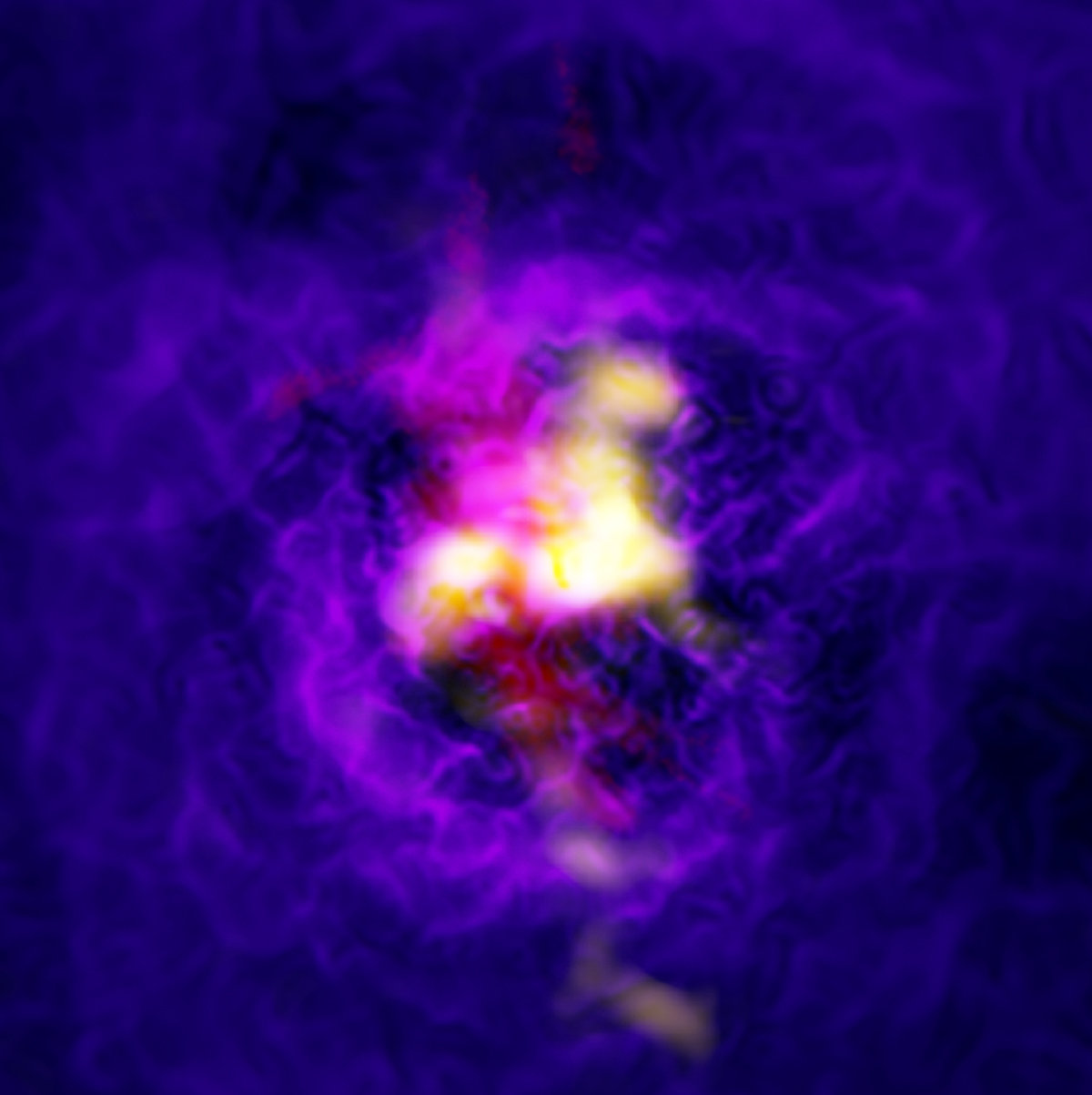 One billion light years from Earth is one of the most massive structures of the universe, a huge elliptical galaxy surrounded by a bunch of other galaxies known as Abell 2597. In the center of the central galaxy, a supermassive black hole feeds the cosmic equivalent to a monumental fountain, drawing in the huge stores of cold molecular gases and scattering them back in an ongoing cycle.

Astronomers have argued that fountains like the continuous recirculation of the fuel that forms the stars of a galaxy. The new Abell 2597 Atacama Large Millimeter / Submillimeter Array (ALMA) presents the first clear and persuasive proof of the simultaneous infiltration and exhaust of gases driven by a supermassive black hole. Researchers report their observations in the last issue of the study The astrophysical journal.

"The supermassive black hole at the center of this gigantic galaxy acts as a mechanical" pump "in a water well," said Grant Tremblay, an astrophysicist at the Harvard-Smithsonian Astrophysics Center in Cambridge, Massachusetts, and lead author on paper. "This is one of the first systems in which we find clear evidence for both the cold entrance of the molecular gases to the black hole and the exit or ejection from the jets that the black hole launches."

According to the researchers, the entire system works through a self-regulating feedback loop. The infiltrative material provides energy for the well as it "flows" to the central black hole, like the water that penetrates the well of a well. This inflammatory gas then causes the black hole with activity, launching high velocity jets of superheated material that pull out of the galaxy. While traveling, this material pushes agglomerations and gas streams into the expansive halo of the galaxy, where it finally rains back on the black hole, triggering the whole process again.

In total, about three billion solar masses of molecular gas are part of this slit, forming a filamentous nebula that stretches over the innermost 100,000 light-years of the galaxy.

In a previous study by the same authors published in Nature, researchers have been able to verify the interconnection between the black hole and the galactic fountain, observing the region in a range of wavelengths or portions of the spectrum. By studying the location and movement of carbon monoxide (CO) molecules with ALMA, which shine brightly in millimeter wavelength light, the researchers could measure the gas movement as it drops to the black hole.

Earlier data from the ESO's Extra Large Telescope Spectroscopic Multiple Unit (MUSE) showed that hot, ionized gas is expelled from the galaxy – essentially the fountain of the fountain. New ALMA observations have found clusters of cold molecular gases in exactly the same locations as the hot gas observed in previous observations.

"A unique aspect here is a very detailed analysis of the source, using the ALMA and MUSE data. The two facilities make for an incredibly powerful combination," Tremblay said. "ALMA revealed the distribution and movements of cold molecular cloud clouds, and MUSE did the same for ionized hot gas."

ALMA and MUSE data were combined with a new, ultra-deep observation of the cluster by NASA's Chandra X-ray Observatory, which reveals the hot phase of this fountain in exquisite detail, the researchers noted.

The observations also support the hypothesis that the ionized and cold hot molecular nebulae are the same because ionized hot gas is simply a "shell" around the cold molecular nuclei that pours into this galaxy fountain.

This multiple-length approach offers an extremely complete picture of this system. "It's like observing rain, rain and rain at the same time," Tremblay noted. Although this is just an observation of a galaxy, astronomers speculate that they can observe a process that is common in galaxies and fundamental to their evolution.

Continue to explore:
Image: Shadows are spinning around our supermassive black hole