When Alfredo Cornejo was Godoy Cruz's intender, he sought that Law 7814 was promulgated, limiting the re-election of the planters to a single consecutive period.

Finally, yesterday, to 11 years of sanction and to 9 of the popular consultation, now the governor promulgated the norm.

"We signed the decree promulgating the amendment to Article 198 of the Constitution that limits the reelection of voters. It is an important institutional leap, it is healthy for our democracy and our political system, said the president on the fourth floor of the Government House.

Despite the fact that there have been long requests to approve the decree, only yesterday the governor decided to sign it. "Now is the time because in 2019 they will elect the mayors and start the electoral calendar", justified the decision.

And today he considered that "the initiative has a broad social and political consensus. 83% of the people in Mendoza gave this article, which did not reach (in 2009) half plus one of the electoral body and we believe that this interpretation of the Court is many years ago.

It is also called for by several social actors, and the political leadership of all parties has manifested him more than once in the provincial legislature. "

At the press conference, as a block approval of his decision, he was flanked by Vice Governor Laura Montero; Ministers Nieri and Kerchner; and his powerful people in the Senate, Jaliff and Costarelli, and Senator Cecilia Paéz.

In the past, the governor met with thirteen directors of Cambia Mendoza, although only eleven attended the press conference. Mario Abed (Junín) and Juan Carlos Diponso (San Carlos) were absent, only the two caciques that by this decision nor may appear in next year's elections.

These two are added to the five "affected" PJ: Roberto Righi (Lavalle), Jorge Giménez (San Martin), Martin Aveiro (Tunuyán), Emir Felix (San Rafael) and Alejandro Bermejo (Maipú) who, as they have been in their headquarters for more than a period, will have their re-election ban in 2019. 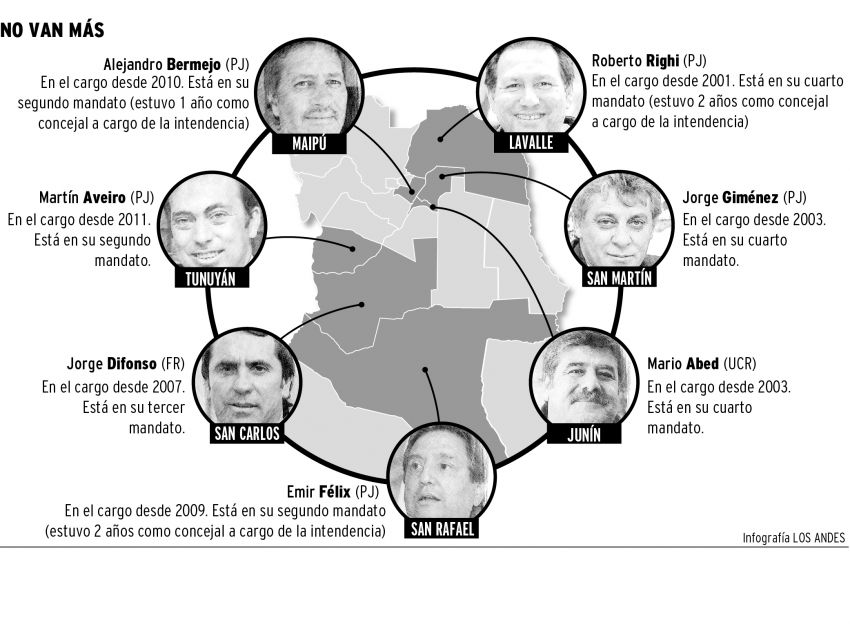 For this reason, yesterday – as Cornejo's announcement ended, Peronism came out to criticize the measure and even the head of the new party, Guillermo Carmona, He called it unconstitutional, so it is not excluded that PJ resort at the Court to stop it. "The amendment was not legally approved because it did not obtain the majority in relation to the electoral list according to the criteria of the Supreme Court of Justice", he added.

In order to change the Constitution, a greater consensus is needed than the adoption of a law. They are basically three stages: a law on the necessity of the reform – which requires 2/3 of the votes – a plebiscite and promulgation, what Cornejo has done now to resurrect the constitutional reform that was truncated in 2009.

For constitutionalist Gabriela Abalos, "the idea of ​​limiting the election is a force for the republic benefiting from democracy. It is a measure that responds to principles such as equality before the law, periodicity and accountability of officials. "

The specialist explained that in order to limit the re-election of the Mendoza planners there were three possible ways: the modification of the Organic Law of Municipalities (there is a Mabel Guerra project in the deputies), that each commune sanctions an ordinance (as did Guaymallén and Rivadavia) to implement the law of 7,814. The latter was the one chosen by Cornejo.

More than a decade

During the Julio Cobos (2007) government, unanimous approval was given to 7814, which aimed to amend Article 198 of the Provincial Constitution to limit the re-election of the perpetrators. Like any amendment by an amendment, the proposal should be subject to a referendum in the next legislative elections.

thus, two years later – during Celso Jaque's government– has been called a plebiscite and Yes, she earned 83%, but it did not reach half plus one of the standards which – as interpreted by the Supreme Court in the 1989 Kemelmajer judgment– An amendment needs to be approved.

All he has to do is promulgate the norm, a task that has not been done neither Jaque nor Francisco Pérez despite the demands of various political forces and institutions.

Since 2009, different political actors have spoken in favor of the normative act.

In 2010, Cornejo made it as mayor of Godoy Cruz, and in 2011 the Senate approved a draft resolution. The following year, the senator César Biffi (UCR) made the same request to Fransicco Pérez, who repeated MEP Néstor Parés (UCR) in 2015 and a colleague Pablo Piore (Pro) one year later.

Latest in Cornejo's current management: in September, MEPs Mario Vadillo, Pablo Cairo and Eduardo Martínez presented a project; and last year the pro-government ordinances themselves asked him to adopt the amendment in a letter. Yesterday, they finally answered.

Law 7814 of the constitutional reform was presented in 1997 and eventually sanctioned on November 14, 2007. At that time, Julio Cobos was governor and Juan Carlos Jaliff, his vice-president.

The amended Article 198 of the Constitution of the Province, which reads as follows: "The initiators will be directly elected by the population of the respective communes by a simple majority of the validly cast votes and can be re-elected for one consecutive term.They were re-elected, they can only be elected with a certain amount of time. "

Instead, says the original text: "The citizens will be elected directly by the population of the respective municipalities by the simple majority of valid votes and can be re-elected."

This reform was subjected to a referendum in 2009 and won Yes, but it was not promulgated by Jaque or his successor, Pérez.

Law 7814 amending Article 198 of the Constitution is approved.

In the referendum approving this reform, "yes" gets 83% of the vote, but it does not meet most of the standards set by the Court in the 1989 Kemelmajer judgment.

Law 8252 is subject to popular consultation, which proposes to amend Article 221 of the Constitution of the province, changing the word "voters" to "voters" (thus avoiding this decision). Win No.

At the beginning of November, the State Prosecutor's Office recommended rejecting the amparo that Deputy Vadillo submitted to the governor to impose Law 7814. It might be a precedent if PJ returns to the Court now.