With incidents outside, creating UniCABA is being discussed in the Buenos Aires Legislature – 11/22/2018 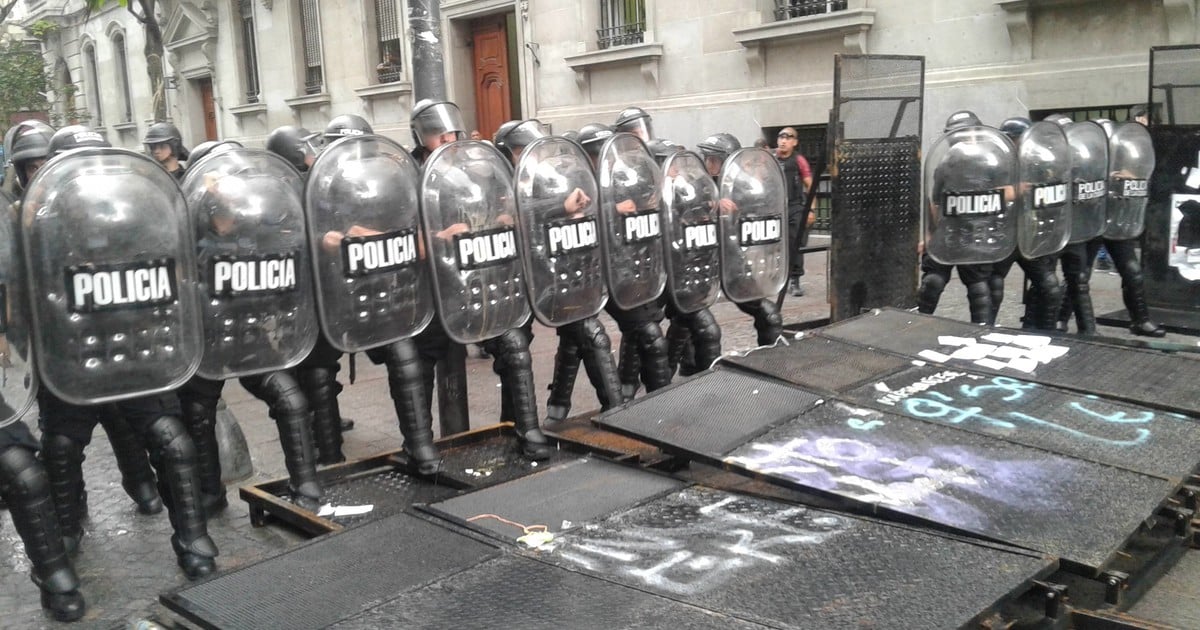 While outside a group of protesters facing the police, the Buenosairean Legislature debated on Thursday the project that creates UniCABA, a university for educational training in the city of Buenos Aires, which will replace the 29 state training institutes there is so far

Early in the day, a small group of protesters identified with MST flags fired a fence and came face to face with the local police, who responded by throwing pepper. In addition, some opposition MPs supported the protest.

The legislature is completely fenced off and all hits are interrupted. There is a lot of police presence, with anti-war trucks and patrol cars.

Maximiliano Ferraro, the legislator of Vamos Juntos and head of the Education Committee, explained to Clarin that this project is trying to "improve and try to have educational policies that prioritize teacher education." It has two objective goals, one to establish the objective goals of rights and the obligations of both the Ministry of Education and the Teacher Training Institutes, as well as the construction of an evaluation and statistics system. We want to build an evaluation culture. "

Meanwhile, Buenos Aires Education Minister Soledad Acuña criticized the protests: "The educational community is something else, it is classroom learning and learning, it is a group that cries out loud, but there is a large majority that agrees," said in the Miter radio.

Controversy comes from last year: when in November last year the government ruled Horacio Rodríguez Larreta He presented the project, provoking rejection and resistance both from state teachers and from private teachers and from the Church (responsible for 20 institutes) because it involved its dissolution.

After the negative reactions, the Government modified the initiative and this year sent a parliamentary term to the European Parliament a second version of the draft. However, it is also rejected by students and teachers.

Discussions between the protesters and the city police. (Luciano Thieberger)

– A new university for teacher education is being created, UniCABA, which will coexist with existing teacher training institutions or teachers. Thus, those wishing to train for teachers can choose between this public university and the tertiary, public and private offer.

– The new one UniCABA will be organized in 2019. In the first months of next year, the normalization rector and the management team will be appointed, who will need to draw up the institutional project and follow the empowerment procedures. The first records will begin in the second semester of 2019 and the first students will start studying in 2020.

– A trial of teacher evaluation. They will create the first evaluation agency – with the participation of teachers – whose mission will be to define indicators, standards and test measurements. This agency will be led by Mariano Palamidessi, the current director of the Uruguay National Institute for Educational Assessment.

– Private institutes will not be obliged to use the administrative information system that establishes the project that 29 state teachers should adapt. This digital platform will allow authorities to know the number of students and teachers that teachers have. Private teachers can continue to use their systems as long as they send the data they request to the authorities: this information is essential because enrollment is linked to grants.

Incidents before the Legislature. (Luciano Thieberger)

– Opposition legislators question the project. They claim to resort to hierarchy and modernization arguments, but in reality, they are trying to slowly destroy public teachers, dismantling and damping them with the creation of a university. For Clarín's experts, this project is better than the first project presented last year, but stresses that conflict and lack of dialogue have led to the loss of opportunity to build a larger consensus initiative.

On the other hand, ITOs opponent blocks in Buenos Aires Legislature they have failed to raise the quorum needed to deal with a series of educational records in a special session.

Called at 10 am, it was expected that the special hearing would not be proven because of the lack of quorum, which became apparent after 10.30, when the first vice president of the body, Francisco Quintana, he raised it, representing only 25 legislators within the 31 necessary sessions.

Speaker of the ruling bloc, Agustin Forchieri, sent a note on the spot, saying that "Vamos Juntos" would not be added to the meeting, which excluded any possibility of holding the meeting.