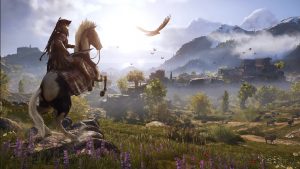 New searches, objects, cosmetics, and a high level ceiling will come this month.

to Ubisoft Assassin's Creed Odyssey will receive many new features and new searches in November, as highlighted in a new developer update video. The first story of "The Lost Tales of Greece" will come out and bring you a new search called "The Show Must Go On". It will be seen that Kassandra or Alexios plays the role of Leonidas in the Battle of 300, when introducing his own dialogues.

A lot of other content such as the Epic Mercenaries (which were waiting but coming back later this month) and Epic Ships will also be available, offering new articles and models of ships as rewards. A new mythical creature starts on November 13 with Cyclops and will stay for a while, so do not worry if you are too low. Other features include an overhead cap (up to level 70), transmigration of cosmetics and many more.

This should prepare players for the next piece of content in December, namely Legacy of the first blade. Paid DLC will explore the history of the first hidden blade user and will probably bring new areas, new missions and much more to the forefront. More free content is planned for Assassin's Creed Odyssey so stay tuned for more details.