Vasil Petrov: I applied singing to enter the Conservatory more easily. I liked 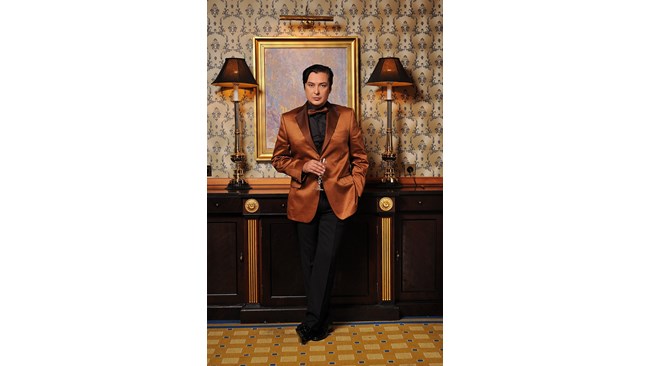 It is not a bad thing to be like the one who made the bridge between jazz and pope, says Bulgarian Frank Sinatra

With a mixture of jazz, swing and boss, the new Vassil Petrov will turn NDK again into an elite jazz club for the second edition of the Sinatra: Vegas show. One of Bulgaria's most talented singers will present the original arrangements of Frank Sinatra's eternal hits in an elegant show on November 12 in Hall 1 of the National Palace of Culture.

Vasil Petrov was born on April 30, 1964 in Sofia. In 1991 he graduated from the conservatory's vocal faculty with a pop music specialty. In 1992 and 1994 he was the best-selling performer in Bulgaria. At the first Bulgarian national prizes "Orpheus +" Vasil Petrov was chosen as the best male voice of the year. He also won three categories – best male vocals, best hit of the year, Best Album of the Year for The Other.

He concerted in Helsinki, Oslo, Vienna, Stockholm, Lugano (Switzerland), Belgrade and Lillehammer (Norway) at the Winter Olympics. With his rich timbre and velvety voice, he became known as Frank Sinatra in Bulgaria.

– Mister. Petrov, is the second edition of your show, Sinatra: Vegas, what do I hear and hear the audience?

– This is the second edition, but not a repeat of the previous show, which has been a great success. Now, the repertoire has been completely renovated, preserving the greatest hits of this era – those of the 1960s. We also have new soloists, with Bruce Johnson and singer Valeria Stoyanova again. These include Michaela Fileva and Orlin Pavlov. On stage will be a Big Star band with conductor Antoni Donchev, and among the musicians will be strangers. Two ballet dancers will dance on the stage. With Orlin Pavlov and Bruce Johnson we will make a set of gentlemen to remind us of the 60s, when the show business of Las Vegas was created with Frank Sinatra and the company's sketches.

– How long does it repeat before a concert, are you going in another way?

– Generally, if not necessary, do not repeat too much. Long rehearsals are tedious and if you have to repeat everything that will happen at the concert, the surprise element is lost. It must be immediate, you have to be natural on stage.

"How did you start singing?"

– I sang in a band of amateurs and I had the intention of being instrumental. When I decided to go to the Conservatory's course department, I thought I would not be able to pass the instrumental examinations. That's why I decided to apply myself with singing – to make it easier. So I accidentally came back to sing. I liked that I liked it.

"Your whole family is musical – your grandfather founded the Kaval Choir, what kind of child were you?

"I am baptized to my grandfather, besides the founder of the choir" Kaval ", he is among the founders of the choir" Slavia ", my grandparents were singing in church choirs, and my other grandmother, God forgive her, was also musical. but

in our family we do not have

I also said that my parents made me a little mad.

"Was it hard for you to find your way after the Conservatory?"

"No, on the contrary, the times broke apart and there was a niche in jazz. I was already beginning to be interested, this guy made an impression on me and everything came to me.

– You have concerts in many countries. Where did you go abroad to sing for the first time?

– It was in 1991. I was traveling to Oslo, Norway, with the military group. The soloist was Nelly Rangelova and I had an independent show – 15 minutes each night. I've been to Oslo for a month and a half. I liked the audience, "she answered surprisingly well. I think an interesting story since then. The Norwegian crown has jumped a lot since the end of the Gulf War and I decided to withdraw some of my local bank fees because the amount has become significant due to the change in rate. I went home with the money in my apartment. Then they suddenly disappeared! First I decided we lost them. Then, forgive me the Lord, I thought some of those who supported the house stole them. And the truth is, I'm a very scattered person. When was the time to go to Bulgaria, the day before I got to the ferry, I found the money in a closet in the apartment. So I managed to keep my theme fee. (Laugh.)

– And you had concerts in Japan, how did your country look like?

"I remember that the pianist with whom we worked together – Rumen Toskov – could not bear the Japanese cuisine at all and he always sought European food and liked local food for me.

I was very impressed with the precision of the Japanese. Our readings were read in a few minutes. I was driving the driver near the room

if we were late

Everything was refined, including the concert itself. Anthracite was exactly 10 minutes – more, less. Buses can be done for 15 minutes, followed by a 30 minute autograph session. Everything ends a second later – no time isted.

– Do you remember your first big prizes?

– It was 1995 for Orpheus Plus. I received three awards for the singer, album and year contest. I received all the rewards one after the other – it was amazing!

"Do you have the faces you felt on stage today?"

– Yes Yes. Whenever you go on stage, feeling is very special. He feels preferential. I thank God for giving me this chance and there is an audience that wants to sink into my world. In this sense, the musician's profession is very good.

In addition to playing nice, painting and even making some exhibitions. How did you get started?

"At first I scratched what I did when I had time

they convinced me it was

time to get started

and that I have to treat my hobby professionally. But I was afraid to lose interest. I opened my first exhibition in Old Plovdiv in 2004. Then, after my Apollonia concert, I made an exhibition that was reflected in the media next year.

– Do you have interesting experiences with your fans? Veselin Marinov said how a fan had given him a key in his house?

"Well, that's not what happened to me." I received a variety of gifts – very expensive, very sincere, like a golden cross enlightened – people gave me invaluable and valuable things for them.

– Who and when did you first name "Sinatra in Bulgaria"?

– Zhelyaz Sagaev, journalist at Pohled. It was in the early '90s. Then there was a concert at Villa Kazasyan's Big Band Culture National Palace.

Zhelyaz wrote an article about the concert and among other things mentioned that Vili Kazasyan presented the famous singer Vassil Petrov, this time in the field of Frank Sinatra in Bulgaria. That's where the media started, it became my name.

"Have you ever been uncomfortable with this comparison?"

"No, in any case, because I did not suspect this resemblance." When I realized that they resembled Sinatra, I even started to emphasize it at times. "It is not good to fit with the man who made the bridge between jazz and pope.