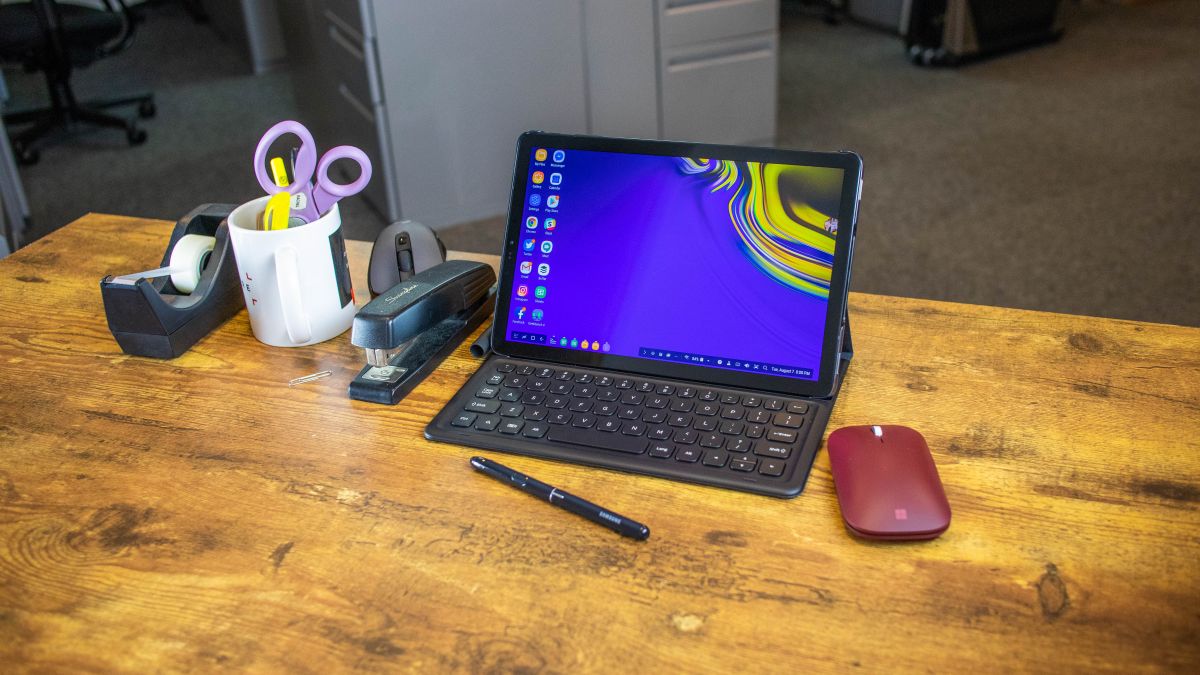 The Samsung Galaxy Tab S4 is the only Android tablet that can be labeled as a true 2-in-1 tablet and offers laptop-like mobility. Notably, it's not as affordable as other Android tablets on the market either, due to its high-end hardware and abundance of productivity features.

But it still costs as much as Apple iPad, which is considered to be the best productivity tablet around. Precisely, it takes on the iPad Pro 10.5 with a bundled S pen stylus, 64GB inbuilt storage and 4GB of RAM. All this comes at a premium cost of Rs 57,900.

The key selling points over the iPad here is the Bundled S Pen (Apple Pencil is sold separately) and the option for memory expansion using a microSD card. Additionally, the new built-in Dex mode, which mimics the desktop interface and has second-screen capabilities. Samsung has done a good job of putting this laptop-like mode with re-sizable windows, system tray and task bar without adding any bulk to the software.

Although it's a useful feature, Dex still feels like work in progress. For example, the touch interface is not as touch-friendly, and for laptop like operations you need to invest in the optional keyboard cover which does not have a trackpad. You need to pair and Bluetooth mouse to navigate through the Dex interface.

The specs lie a little bit: it does not matter that the tablet is underpowered on paper with a early 2017 chipset that is easily outpaced by Apple's laptop-rivaling chip speeds.

Anyway, the truth is our biggest issue with all the tablets has little to do with stagnant specs and hardware performance. It's that they're always confined by restrictive mobile-first apps and interfaces. Samsung Dex tries to make good on that 2-in-1 promise with a real system dock so you can quickly switch between apps like on a laptop.

They can not be refined but the Tab S4 introduces a lot of futuristic ideas that look like heading to the right direction. Since we do not have the Microsoft Surface Go or Chromebooks in India, Samsung still has a huge market to tap in. But is it worth the asking price?

As an introductory offer, you can buy the device and get Rs 5000 cashback on HDFC Bank Credit Cards, and EMI on HDFC Bank Debit Cards and Consumer Durable Loans.

Galaxy Tab S4 customers on Jio 4G, would be entitled to receive instant cashback of Rs 2,750 on recharging with Rs 198 or Rs 299 plan. They would also get double data benefits on every recharge for the next 4 recharges, giving them the freedom to enjoy streaming cricket, music, video and much more.

Samsung's new built-in Dex mode is a hit and miss. It transforms the normal Android look into a desktop-like interface. Meaning, apps are left-aligned (like on a Windows PC), clicking on an app opens re-sizable windows, and there is an app dock and system tray at the bottom to flip between open apps and configure all sorts of quick settings.

Ideally, all of this should work seamlessly on a 10.5-inch display, but experience tells a different story. Resizing apps and touch detection is a bit off. It makes simple tasks like tapping the close button (X) in the top right corner of a chore.

It's simple, you need the S Pen or a Bluetooth mouse to operate the Dex mode without a problem. Samsung's core software works fine, but apps as popular (and as standard) as Google's should work without crashing. Google Docs crashed several times while we wrote this review on the Tab S4.

Another issue we encountered while using Hangouts Meet is that we're sideways to everyone else when the Tab S4 is in landscape mode and docked on the Book Cover Keyboard. The simplest fix is ​​to turn the tablet to right, but then it turns other people on the call sideways on the screen.

We did a Bluetooth mouse to get the best out of productivity, and to be honest, it worked well in both Dex and normal modes. However, it is not ideal on a commute or at a tight space.

The idea behind the Dex mode is really cool, but Samsung has to work on fixing design flaws to make it better for its users to make the most out of the productivity features available.

With Pen and Book Keyboard Cover

As a standalone tablet, the Samsung Galaxy Tab S4 is a fine experience. But the moment it docks with the optional Book Keyboard Cover, things get messy even though the setup looks like a dream. Especially for those who work on the go.

Given the size of the tablet, the keyboard is slightly cramped until you get used to it. It is not backlit either, which means you have to use the light from the display in darker conditions.

The layout is slightly different from the Mac and Windows keyboard. We advise you to invest in the keyboard only if you have tried it and are ready to deal with the learning curve involved.

Samsung has a tablet-appropriate S Pen (larger than the Note Pen S Pen), and this one is more rounded and feels more natural to hold than last year's S3 pen.

There's a tiny metal protrusion in the middle of the stylus to prevent it from rolling away. There is also a stylus holster that clips onto Samsung's keyboard and it does not charge whatsoever to use.

This contrasts very well with the Apple Pencil, which does not require charging, has no holster on the iPad keyboard and rolls away every time we set it on a table.

With Pen functionality is typical of a Samsung tablet or Note phone. You can draw, jot down notes, annotate screenshots, translate text, and new this year (on the table at least) is the ability to send Live Messages.

Sadly, the Air Commands (shortcuts to use these features) do not work in Dex mode.