The moment I first saw Thule Up Close 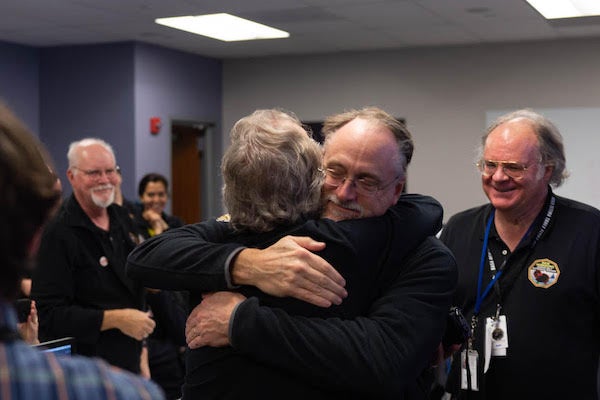 Planning a exploration trip for more than three years, and the time comes when you see a new world for the first time. This is an informal outline of how we experienced this during Ultima Thule's encounter with NASA's New Horizon spacecraft. The setting is a simple conference room on New Year's Eve 2019 in Building 200 on Johns Hopkins University's Applied Physics Laboratory campus, exploiting new horizons. The Hall supports the analysis activities of the New Horizons research team, one of the three divisions of the global science team set up to investigate Ultima Thule. The other scientific divisions are housed in similar premises elsewhere in building 200. Other buildings in the LPA host the two navigation teams, the operations team, a diverse set of instrument engineers and spacecraft, and a variety of management and assistance personnel who make it possible for more than 100 people to combine their efforts in common causes. Alan Stern is the primary investigator and responsible for everyone's mission.

It took us all to make the meeting happen. Each of us has a story to tell, a part of the game, a unique perspective. Credit for success goes far, far more people than shown in the images in this article, not to mention the few they call in the narrative. Ultimately, however, the experience of meeting is always personal – where you, where you were, who you were with, and what were the common reactions of the team you worked with best. This story is simply what I have seen from the point of view of the small part of the team I have encountered at the time.

The arrival of Ultima Thule's first high-resolution image in physical terms may be more banal.

From an emotional point of view, it could not be more electric.

The Deep Space Network has spent an hour capturing telemetry from spacecraft New Horizons, all while sending the linear image line to a server and a reduction pipe in Boulder, Colorado. Wait, check, wait longer for a particular file to build in a specific directory. Who actually sees that the image first reduces to who is reporting the first key file update – or is the fastest typist.

It's Stuart Robbins who finally shouts: "I get it!" and we immediately hacked our work behind our analysis room. This is my back to the bottom right of the image above. I do not see anything! I doubt many of us can. We have a large poster in the front of the room, so the question is: how fast can Stuart remember how to type the command to connect to it?

We get the picture on the screen and everyone goes crazy. This is Marc Buie taking a victory over the top. Marc was the first to discover Ultima Thule and with immense skill, concentration, determination, blood, sweat (and tears), he had been campaigning for four years, defeating colleagues (and others) all that they had for to determine its precise path through space. Turn a needle while flying in the galaxy – let's see – only 42 times the speed of the sound. There has never been a spacecraft that needs such precision navigation so far.

Oh, hey, that's Brian May sitting in the back. He walked in about 30 seconds before the camera exploded with three years of penetrating energy. It's the hour of the show, except we're all on stage now. We're all in the area. We all have our pieces and instruments to play, but always carefully each other while listening to where music goes. Do you see people with your hands on the keyboard? I do not go back to work, do not calm down the show. The beatings started and we made claws in the night. A quick reading on Ultima Thule is the task in front of us. Everybody contributes. I look around the room at a time and see Brian working quietly with another team member on using stereo images to view Ultima Thule.

But first John Spencer has a solo. This is John sitting on the right. (I'm at the far right, certainly uploading the image with me). John led the team by defining the entire observation sequence for Ultima Thule. Three years ago, a few months after we flew by Pluto, we fired with New Horizons' propellers to head over to Ultima Thule. John got up at a team meeting in November 2015 to ask the question: "Well OK, so what do we do when we get there?" Teleconsulations, meetings, PowerPoint presentations, simulations, consultations. In the middle of one, I thought "Gawd, John is trying to order Chinese food for 100!" Trick ensures that everyone gets enough to be happy, even if they can not get everything they want. working with Marc to make sure we got to Ultima Thule OK first.

So solo! While we all look impatient, John, in his unpleasant style, remembers Stuart's exact position of Ultima Thule in the picture and immediately knows that I have even gotten the money. Navigation looks perfect – we should get everything we asked for. He sings over the room. At a concert, the crowd screams and screams – and we.

I'm right, grinning, and that's Simon Porter behind the left. The four were BORG – the binary object recognition group. As part of a larger hazard recognition team, we used long-range images on the spacecraft to see if the way to Pluto was safe in 2015 and again when approaching Ultima Thule. The risk team (led by Mark Showalter, who is in the bottom left corner of the previous image) said the road to Ultima Thule was dusty and scarce for weeks.

But if the ship was probably secure against physical injury, the project team was still worried that by approaching us, we could find that Ultima Thule was indeed a two-tier binary system, which could require a clear adjustment of our pre-programmed targeting. I stayed in the "crow nest" almost all the way, supporting the efforts of the two navigation teams. I was more than a little nervous that we could really weave her needle.

So I have to hug John too! But there are more. Two years ago, John instructed me to lead the design of the best-resolution imaging sequences. Whether we could target Ultima Thule with the high resolution camera on New Horizons, it was an open question at first. I always cared John about a trick or another that we could do to do everything. And so he did, so he did.

Here's Ultima Thule! Can you read this image? (Full disclosure: here we look at a closer picture that came later in the evening, not the first one that came down.) I try to learn from my time with the team, but I am not prepared as a planetary scientist. As an extragalactic astronomer, I can read galaxies, star groups, what you have, but that's beyond my experience. But then it is beyond the experience of all the others, and that is the essence of the discovery. I know that Ultima Thule is nothing like what I saw before. Is there anything special, though? Hope not! I've never been that far. The whole Kuiper tape was unknown until the early nineties. We hope Ultima Thule is not weird, but rather an ordinary person from a weird place.

Each member of the team will analyze differently the Last Thule based on their own experience, intuition, knowledge, influence. We will share all these ideas with ourselves, with different arguments of argumentation, face deboning, computation, simulation, gestational. We will be wrong about things in relation to others. Perfect ideas will appear, often from those who are not in the team, but who patiently wait (or do not wait patiently) to see what I did from the outer solar system.

But for now, imagine here with us in the dark room. Stay calm, look, think, imagine, reflect how far we have traveled and what we will learn from our journey. It's your adventure.