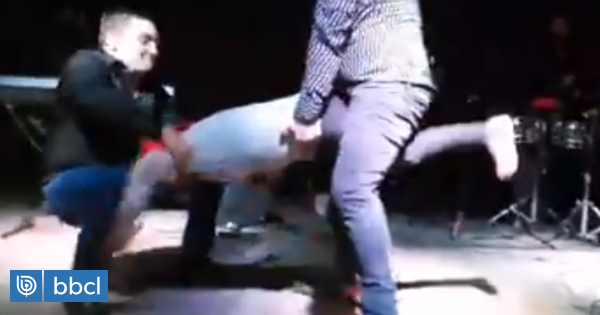 Indignation caused in the social networks the behavior of some supposed members of the musical group Los Kuatreros del Sur with a woman during a show in Puerto Montt.

The woman, known in the area as "Maria", is a firm fan of the group and of her the favorite song is "How the worm is killed", the one who danced on a scene.

But what bothered it was inadequate posts that the men seen in the pictures had with the woman.

For example, from the beginning you can see how she dancing lying on the floor, and one of the musicians sneaks on her, then takes her waist and simulates gestures of sexual connotation.

Later, he turns it around another subject packs her feet.

Then they stop it, they turn it back and when they leave it on the edge of the stage, the woman fell on the floor.

The video was recorded in front of the audience that came to the show. You can hear in the registry laughter from some participants.

"Ugly and ordinary", "I was embarrassed to see how Maria was marked" and "more than funny, I think it's a really bad taste," were some of the video responses, which at the end of this year's edition accrue over 40,000 copies.