Babiš: The government wants CEZ to build a new block of Dukovany 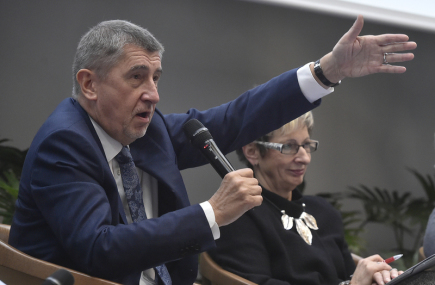 Valec (Třebíčsko) – The construction of a new block of Dukovany nuclear power plants should be ensured by a daughter of ČEZ, which operates the power plant, according to Prime Minister Andrej Babiš (ANO). The state is ready to support the investment by securing it as second, Babis said. CEZ has warned that it opposes minority shareholders. According to a representative of some of them, Babis's proposed procedure is illegal. CEZ shares from the Prague Stock Exchange responded by a significant decline in the first year, but almost cleared the trading session.

CEZ CEO Daniel Beneš said the preparations for the construction of the new nuclear bloc continue. "I say we are all dedicated to the government, state institutions and CEZ," he said. The highest spending can be expected after the preparatory work, ie after 2027, he added. He thinks it would be better for Czech energy to stay 100% of the state. "I think CEZ should analyze if it does not sell part of a minority shareholding, but this discussion is ongoing and it does not have a conclusion," he said.

"We are convinced that the investment is efficient and rewarding," Babis told a seminar today on the Dukovany power plant in Valca, Třebíč. He said it was not true that the government had only the expansion of the life of the current Dukovan blocks. "We want to analyze all the possibilities, but I said clearly that the government wants CEZ to build a new block in Dukovany," the prime minister said.

According to Babis, the subsidiary should take care of building blocks, CEZ should put assets Dukovan, eventually also Temelin. The guarantor of the investment would be CEZ, the state will be second in rank. It was also important to mark the technology to build a block in time and budget. He said this with reference to the construction of the stretch block in Finland and Slovakia.

According to the economist and adviser of the J & T investment group Michal Šnobr, who is part of ČEZ's minority shareholders, the construction of a new block in Dukovany proposed by Babis is banned in the Czech Republic and outside the approved warranty model for the construction of nuclear power plants in the EU. The problem is mainly that CEZ's board of directors would have been in criminal and property liability, he stressed. The economic efficiency and cost-effectiveness of the construction of the new nuclear reactors in Dukovany is questioned by Edvard Sequens of the Calla environmental organization.

Minister of Industry and Trade, Marta Nováková (for ANO), said in August that the financial model for the construction of the new nuclear block should be decided by the end of this year. By the end of October Babiš spoke about the possible extension of Dukovan's life for ten years. This statement today was "a clear sky blow," said Ales John, chairman of the Civic Security Commission working at the Dukovany power plant, which held the seminar today. Babis, in response to the report on extending the operation of the power plant for 60 years and postponing the construction, was called nonsense. Mayors around the power plant and the Vysočina region support Dukovan's achievement.

"Do not push us to tell you that it will be 31.12 We want to decide and decide when we have enough environments," said Vacha Novakova. She said the government wants to respect the state's energy policy, calling it a backup alternative to prolong the life of Dukovany blocks. CEZ should also take care of the construction of the new block, which should primarily provide funding. "CEZ has earned big profits for several years and pays dividends," she said.

"The minority shareholders have already clearly demonstrated their inability to build nuclear power plants," said ČEZ spokesman Ladislav Kříž. He said it is a long-term strategic investment, but in the short run, profitability is questionable. Possible litigation could block construction for decades. The prime minister admitted that the CEZ minority shareholders have a different interest. It is mainly for CEZ to defend its business plan, he added.

CEZ is the largest Czech energy company. The majority shareholder is a state holding 70% of the shares through the Treasury. The Dukovany Nuclear Power Plant, with a total output of 2040 megawatts, covers one fifth of the electricity consumption in the Czech Republic. Its first block was in operation since 1985.