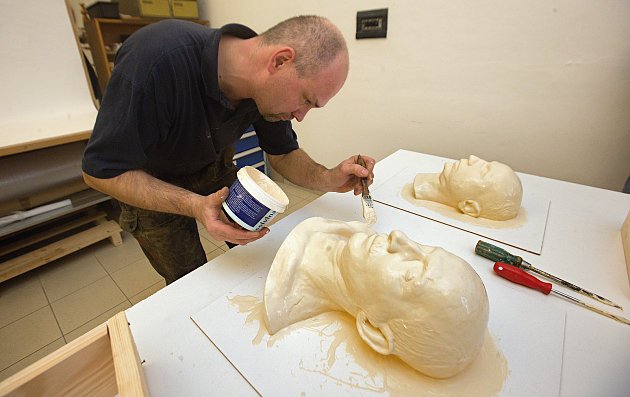 PHOTO GALLERY / History Museum in Olomouc began to produce copies of the post-mortem masks of three men who presented themselves on Monday at the birth of Czechoslovakia.

"Czechoslovakia, or now the Czech Republic has good relations with Israel. Since I have the honor of accompanying President Milos Zeman to the official visit to Israel at the end of November, we decided to bring a set of masks to our country's founders as a gift" , said the Minister of Culture and also former Olomouc Mayor Antonín Staněk (CSSD).

Milan Stecker of the Conservatory of the Museum of Natural History in Olomouc will produce four sets of masks. First, you have to create a rubber form, which then breaks out of the bust, puts it in a hardened bed and pours gypsum. According to him, it is not a physically demanding job, but it is expected to dry the gypsum. Done in about two weeks.

"A set of masks will appear in Israel, one will stay with us, and the other two will take Mr. Staněk to the Ministry of Culture," explains director of the Natural History Museum, Břetislav Holásek.

The mask of Merciful Rastislav Štefánik has been in the Olomouc Museum's warehouse for decades, and the other two heads from Beneš and Masaryk belong to the Prague National Museum, where he loaned the Museum of the National Museum on the occasion of the 100th anniversary of the republic.

Masks are visible from Zborov to the Republic of Olomouc until January 13, 2019.