Police Security at MDR: the main suspect should be Minister Dostálová 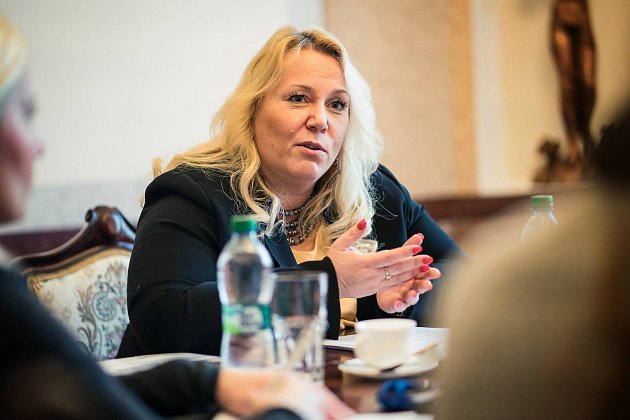 The National Center Against Organized Crime (NCOZ) intervened Wednesday at the Prague Regional Office of the Ministry of Regional Development and at Prague's CzechTourism agency, Vinohrady. The main suspect, according to the E15 server, is Minister Klára Dostálová (DA). She admitted at a press conference that the police intervened with her at her home.

"I can confirm that criminal proceedings are taking place at the Ministry of Regional Development. What I have information should be first and foremost evidence," said Prague Public Prosecutor Aleš Cimbal in the morning at CTK. What does not specify the cause. "No one has yet been charged, but there is only evidence of further progress," added Tomáš Svoboda, head of the embassy.

However, the E15 news portal, referring to the police file they were able to consult with its publishers, said the prime suspect should be Minister of Regional Development, Klára Dostálová. It is assumed that police are suspected of over-execution by civil servants and subsidy fraud. In 2016, she had to act as a deputy for tourism.

The Ministry of Regional Development has occupied the police force. He does not leave us (the employee) in the office. We do not know more. // cc @enkocz

Dostalova, in an afternoon briefing with journalists, said the ministry offers the police maximum synergies. The information on the E15 server showed that the police "is a logic of things" is also being examined by her person, because she was Deputy Minister and Minister was the agency CzechTourism.

"I also say that the police were at my home in the morning, wondering if I had a home service. I said, of course, that I did everything, the police took it and left," she said reporters. However, she said that the police did not answer any questions and did not know what the current intervention had at the ministry's headquarters and in CzechTourism.

However, Dostálová has not yet responded to the statement E15 on the statement. The head of the Karel Šlechtová (ANO) department does not even have more information. "No one contacted me, I will definitely say when it is clear about what it is all about, now without comments, because I have no information," she said.

Intervention at the headquarters of CzechTourism

The news server's newsletter reported in the morning that the intervention at the headquarters of the ministry is about the activities of CzechTourism. According to Radiožurnála, policemen also operate at its headquarters in Vinohrady, Prague. Against the agency in 2016, the Supreme Audit Office (SAO) filed a criminal complaint for violating the obligation to manage foreign assets and negotiate an advantage in awarding a public procurement contract.

SAR claimed that the agency had received contracts, regardless of whether it would be cheaper to compete. For example, she would have bought legal services without considering whether it was the most advantageous option and not organizing the competition even when buying tickets. The distribution of exhibition and promotional items has divided the agency into several small-scale contracts that it has awarded without open competition.

Controllers then revealed that the agency has repeatedly violated budget discipline, for example when buying gift vouchers for spa retreats for nearly 600,000 crowns. Total mistakes generated by SAO are nearly 20 million. At that time, the head of Czech Rostislav Vondruška, the former regional development minister in Jan Fischer's office, is currently in front of a former head of the Agency's Department of Economics.

CzechTourism is an organization that contributes to the state within the Ministry of Regional Development. It was established in 1993 and has the task of coordinating the promotion of the Czech Republic as a tourist destination both in the country and abroad.

A list of ministers for local development over the past 10 yearsMiroslav ČUNEK (KDU-CSL, the second governor of Mirek Topolánek)
from 2 April 2008 to 23 January 2009

Rostislav VONDRUŠKA (non-party proposed by the Social Democrats, Government of Jan Fischer)
from 8 May 2009 to 13 July 2010

Karla ŠLECHTOVÁ (YES, the government of Bohuslav Sobotka)
from 8 October 2014 to 13 December 2017