The senators have not yet voted for the presidential election, the finalists being Kuber and Hampl 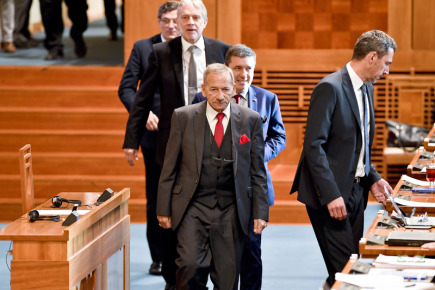 Prague – According to the expectations of its President, the Senate did not elect the Senate in the first round of the three candidates. Senators will decide between Václav Hample (for KDU-CSL) and Jaroslav Kubera (ODS) in the final. Jan Horník (STAN) received the lowest votes.

The second round of elections will begin at 12.00 as the Mother and Independent Club has asked for an hourly break for their talks.

The first round of voting won Kuber with a 35 vote out of 81, Hampl received 22 votes, and Hornik 18 votes. Two voices were invalid, according to Jaroslav Větrovský, chairman of the Senate Electoral Commission (for DA).

In his speech, Hampl underlined the role of the Senate as a protector of the constitutional values ​​of the democratic liberal system in the Czech Republic. "It is important that the Senate, perhaps more than ever, has spoken a clear word when one of the other political actors defies in some way constitutional principles," he said.

The chairman of the Hampl Senate European Committee also highlighted the Euro-Atlantic ties of the Czech Republic and the preparation of his presidency in the EU in 2022. According to Hampla, the Upper House should continue to seek to strengthen its role in the constitutional system, especially the role of control in matters, laws.

The need for clear laws was also highlighted by the president of the Hornik Town Hall. Involvement of laws can be deliberate because it provides endless work for lawyers and consultancy firms. The Senate should, according to Hornik, be a distinct superior room. "We should not be subject to the external pressures of party secretariats and higher interests," said STAN Vice-President and Mayor of Bozi Dar.

"The main mission of the Senate is to defend the constitution, democracy and freedom in this term," said the old Mayor of Teplice and the former Senate Vice-President, Kuber. According to him, all major clubs in the upper chamber, in which he now has the opposition, agree.

But the Senate, according to Cuber, will not oppose the government, however, even if it disagrees with all the laws. It is absolutely necessary for the President of the Senate to be communicated to the President, the Prime Minister and the President of the Chamber, Kuber said. In order to improve the position of the Senate, it is intended to contribute to trips to individual districts to support senators, regardless of their political affiliation. "It is not easy to translate state policy at all, but I am convinced that thanks to my experience, I have managed to make such a transition," he added.