In Strasbourg titles: The mother of an autistic child climbs into a building 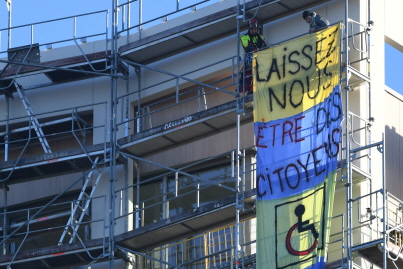 The building is located opposite the old house of the building. In the upper part of the building, the mother, who asked for more money for schooling disabled children, revealed a banner that read "Become a Citizen."

The 35 – year – old mother has already been portrayed by similar actions lately. He is educated in Sand (Bas-Rhin), his 10-year-old autistic son, and is thus permanently accompanied by a school life assistant (AVS) in the classroom.

"The recruitment of AVS is always at the last moment. Very often, children do not have an ISA at the beginning of the school," and witness at the foot of the building another mother, Jarny (Meurthe-et-Moselle) collective citizen's disabilities (CCH), the origin of this spectacular action.

The third mother, who was distinguished in September climbing a crane on the Esplanade campus in Strasbourg, denounces the attitude of the Department of People with Disabilities (MDPH), which "does not take into account the opinions of professionals, neuropediatricians, neuropsychologists," she said.

Fire and salvation are currently on the scene. At around 8 o'clock, two Raid negotiators are in contact with mother mountaineering. The GRIMP firefighters (mounted and intervention group in the dangerous environment) mounted the upper part of the building, 45 m, to secure their mother.

Two rectorate officials went to the scene around 8:45 to discuss with colleagues. "We have reviewed our organization and have greatly increased the means to meet the needs of students," says a head of the Strasbourg Academy. "In Bas-Rhin, 91% of students whose disability was recognized by MDPH are accompanied by AVS care. It was about 74% last year," one source said.