Oil prices have fallen sharply in the last five weeks or so and the worst form of work has continued today. The last time I looked at the oil was on October 12, in an article aptly titled: Breaks in gross sales, but the outlook is grim. As we have seen then, we have been quite bearish in oil prices because recent fundamentals have been far from positive in terms of gross prices and renowned oil forecasters such as the International Agency for Energy (IEA), for example, in the recent currency crisis of the emerging market, reducing their purchasing power. At the same time, OPEC and OPEC oil supplies have increased. The cartel has pumped extra oil to help offset possible deficits caused by Iran, preparing for the reintroduction by the US of harsh economic sanctions in Tehran – which came into force this week. However, the US intends to allow more oil-intensive nations to continue importing crude oil from Iran for another 180 days. These countries include South Korea, Japan, India, China, Turkey, Taiwan, Italy and Greece. In other words, Iranian oil exports will continue to remain around current levels for some good months. In addition, Russian crude oil production has risen to a record high, and in the US, supply has also increased in recent months.

Pressure down could ease

However, with falling prices, you expect the surplus supply to begin to diminish again. After all, it is becoming cheaper for consumer countries to increase their gross purchases, pushing demand, while for inefficient producers it is becoming more and more costly to keep production at current levels, thus reducing supply. But as we continue to remain bearish on oil prices in the long run, it is important to note that prices have now fallen close to the levels we anticipated. As such, we expect the sales pressure to ease in the coming weeks.

But for now, the downward pressure remains intact, and the lowest resistance path is still at the bottom. The key value of WTI's short-term resistance is about $ 62.55, a level that marks the decline in the daily reversing hammer reversed yesterday. Additional resistance comes around the shaded region of the chart, with $ 64.45 in this area being a particularly interesting level because it was the latest low swing (which could become resistance to future retests). With regard to potential support, the area of ​​about $ 60 is very important to track. Not only is this a psychologically significant level, but we have an opening price level of $ 60.10 that converts there, while an untested level of resistance of $ 59.70 is found in the immediate vicinity of the $ 60 hand. Below this area of ​​$ 60, we have the long-term upward trend line to pursue as the next major support. Depending on whether and when the price gets there, the trend line comes around from $ 58.50 to $ 59.00. 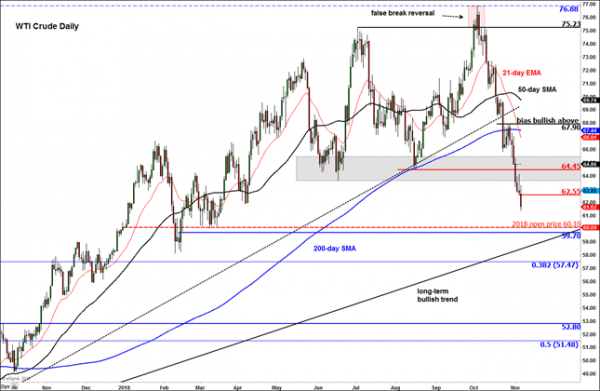