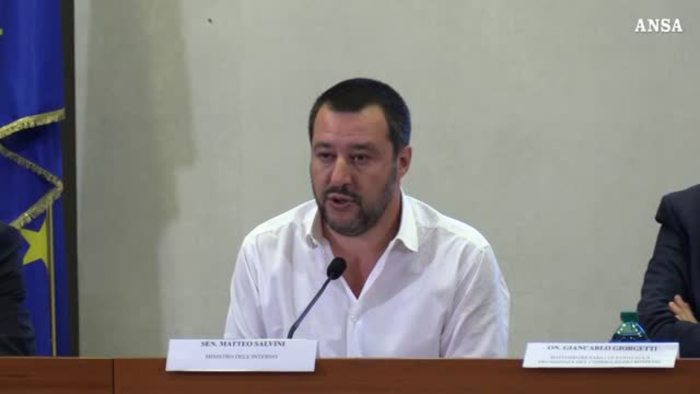 "An educational emergency, something outside the world, but now it is changing: from now on, those who make mistakes pay and pay very much." Matteo Salvini goes straight and, at the end of the summit convened at Viminale with the undersecretary responsible for sports, Giorgetti, Figc and Aia, to analyze the violence against football referees, illustrates his point after suffering the young director on Sunday races Riccardo Bernardini at the end of a match in the promotion league in Lazio.

"I worked for five months to oversee the borders, I did not think there were football fields to defend," says the interior minister, pointing out "the figures that make us reflect and entertain: we talk about hundreds of attacks and admissions the emergency room for boys has a passion, so I applaud the initiative to suspend the Sunday championships in Lazio, hoping it will be the last signal to be sent before the alarm. "

"I will do my best to bring about rules, discipline, good education and sanctions in the camps," the Deputy Prime Minister added, "refusing to consider the idea of ​​militarization, but we must sanction criminals. for 75% of cases comes from cardholders and not from supporters, and for me, those who carry out these acts have to be dismantled. "

Salvini, in short, is the strong line and was a witness to Higuain's shot, expelled with Juventus for saying too many words to the referee: "Despite being a fan of Milan, I was ashamed of our striker's behavior, "The task of revising the rules and sanctions will now be attained by the new Federcalcio chaired by Gabriele Gravina, who, recalls Salvini," took office recently, but I am sure that in a few months it will bring fresh air into the field ".

And the new number 1 of Via Allegri announces that the theme "will have absolute priority in the next federal council." "Penalties for violence against referees will have to increase." We must begin to think about sanctions in order of one or two years until exclusion and the removal of violence We start a broad way of renewal, we must give immediate signals, negotiate only the passion of these boys. " The boys remembered by Marcello Nicchi, the president of the Italian Arbitration Association, are facing "a problem that has been going on for years."

"Today we have reached the point of zero, here we have to start again for a clean and correct shot. It is time to turn the page – explains the head of the Hague – There is a new federation and together with all the components for which we will work change the things that I do not go, I can not take it, we fight for years, The Haga does not accept and will no longer accept to send their children to the massacre without anyone bothering to say enough about this phenomenon. "

However, for Undersecretary Giorgetti, "this situation is a turning point, it can be an opportunity for the Football Association to change the culture of sport with a new course that has to inspire a new system of values ​​for educating our young people. of conscience, we must look to the future for new ideas to eradicate violence. "