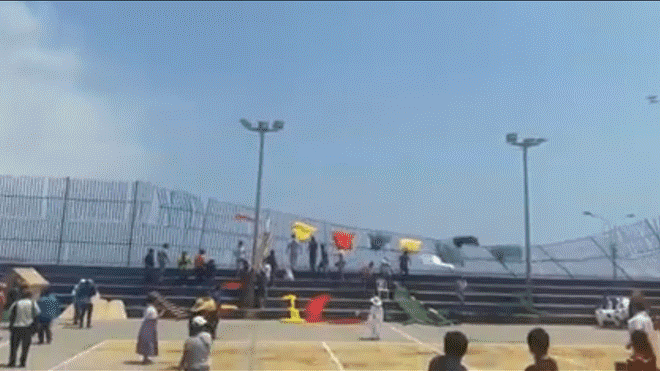 The fall of bars to sports card during a school event He left two people injured as a balance. The event took place in the Chorrillos neighborhood.

The people who were on the scene shared images through the social networks of the incident. In these, it can be seen that the metal bars fall on some assistants of the activity.

The event was a dance festival at the San Genaro School, located on New Caledonia Boulevard. Many of those present were minors.

According to the neighbors, these bars were rusty and were about to fall.

In the video show by a Facebook user you can appreciate the moment of falling bars and also the despair of the people for what happened.

According to the information provided by Canal N, the two affected people were an eight-year-old boy and a 74-year-old girl. Both boys were treated in the same place.

This one sports card It was built 18 years ago. The collapsed structures are still in the seat of the place.

As mentioned, in February of this year, an eight-year-old boy died when a football bow fell on him. The tragic accident happened in Quiñones Park, where they are Chorrillos.

Although they were immediately taken to the EsSalud clinic, they could not save their lives.

At that time, the neighbors indicated that they had repeatedly asked for the maintenance of the games in the parks. However, they claimed they never paid attention.