The Sports University: "Cream fan day" was canceled due to lack of guarantees 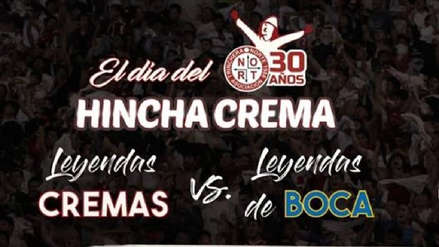 The match between his legends Sports University and Boca Juniors has been canceled. The Peruvian Sports Institute (IPD) has announced that the event will not take place at the National Stadium due to lack of guarantees.

The "Cream fan's day" match scheduled as part of Trench North's anniversary for this Sunday, 18 will not be possible. According to the IPD, the event had no guarantees as a sporting show.

The duel that would be based on figures such as Carlos Mono's " Navarro, José Basualdo, Mauricio Chicho Cerna, Oscar Ibanez, Beto Carranza, Jorge Amado Nunes, "Puma" Carranza among others.

1. The Peruvian Sports Institute (IPD) and Talent Sport has signed a lease agreement for the National Stadium for the "Cream fan's day" sporting event this Sunday, November 18th.

2. By Report no. 226-2018-REGPOL-LIMA / DIVSEESP-UNIPLO, Lima Police Region suggested the rejection of the sporting event scheduled for November 18 to ensure the normal development of citizen activities.

3. In this respect, the Directorate for Sport Safety (Disade) a IPD, in accordance with Law no. 30037 – "The law that prevents and punishes violence in sports shows has rejected the protection and safety plan of the aforementioned event and informed the company Talent Sport and the Interior Ministry's Internal Governance Directorate on 9 November.

4. Under the new lease clause signed by IPD and the company Talent Sport, the organizer is obliged to obtain the necessary guarantees for the performance of the sport show. As this has not happened, the event scheduled for Sunday, November 18, will not take place at the National Stadium to protect the safety of the participants.