Senators have proposed amendments to the Surveillance Act 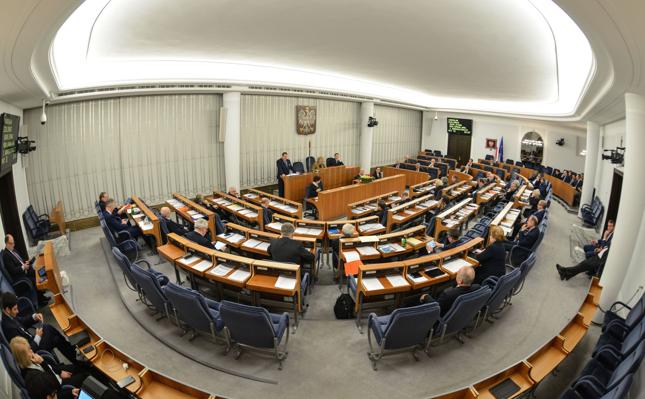 Several amendments were tabled by Senators to the Law on Strengthening Financial Supervision. The opposition has appealed for the rejection of the law and the abolition of the article on taking over banks. Chief of the Budget and Finance Committee, Grzegorz Bierecki (PiS), presented his amendments to protect cooperative banks. 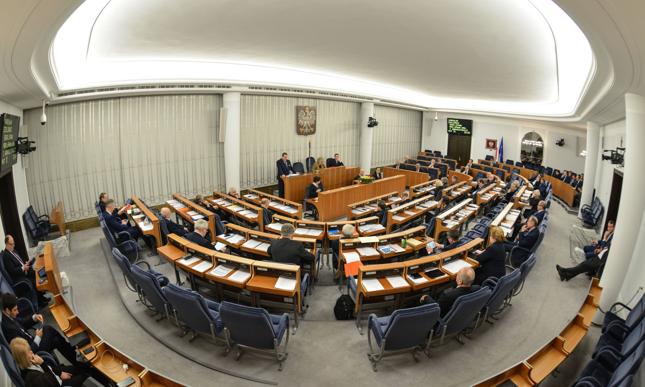 The Senate discussed on Wednesday the law on amending some acts in connection with strengthening financial supervision. One of the PiS adopted at the PiS initiative, as proposed at the second reading in the Sejm, assumes that if the Bank's own funds are reduced below the level required by the Banking Act or the risk of such a reduction, the Polish Financial Supervisory Authority may decide to take over the bank by another bank the acquiring bank's consent "if it does not endanger the security of the funds accumulated in the acquiring bank's accounts or creates such a risk, reducing the bank's own funds that purchase below the legal level required by the law. contains the conditions and dates of taking over the bank by another bank. "

Opposition MPs argued that the amendment was introduced into the banking law two days after the owner, among others the Getin Noble Bank, Leszek Czarnecki, informed the Prosecutor's Office of the suspicion of a crime by Marek Chrzanowski as head of the KNF. According to Gazeta Wyborcza's recent publication, in Czarnecki's opinion, in a conversation in March 2018, Chrzanowski offered his bank favor in exchange for about PLN 40 million.

The draftsman, Grzegorz Bierecki (PiS), argued that the Senate should not suspend work on the act, which the opposition has asked for. In his view, there is no corrupt offer in transcribing the conversation recorded between Czarnecki and Chrzanowski. "It's in the story of Mr Czarnecki's plenipotentiary," he said.

He added that from this "interpreted" content is also a proposal involving the suspension of the bill on the bill against a bribe. "Therefore, stopping work would be the implementation of this corrupt proposal," he said.

"We are working on a law that is necessary for the sustainability of public finances," Bierecki said, adding that it may be unfavorable to some investors in the financial market in Poland "may be unfavorable to Mr Leszek Czarnecki, which is not the result of the transcription", but as he said – there are no reasons why work on the deed should be stopped.

Responding to the senator's questions, he argued that in the whole issue "it is too easy to give faith to people who have used a lie in the past." He noted that "we are dealing with the statement of a man who has run a banking, interest, and concern business with the Polish Financial Supervisory Authority."

Bierecki added that one of the banks of Leszek Czarnecki (Idea Bank – PAP) was placed on the list of public warnings by the Polish Financial Supervisory Authority on the day of the registration. "This is the first bank in this list, so far there were entities that were financial pyramids" – stressed Senator PiS.

He argued that you should not be too indebted to pass sentences, because things may not seem as they are on the one hand.

He noted that he is based on the notions of not believing what is in this transcription of Chrzanowski's record with Czarnecki. According to Bierecki, Leszek Czarnecki, "maybe it's about the possibility of using international arbitration." The Senator pointed out that Czarnecki recapitalised its banks by PLN 200 million between March and October, following the recommendations of the Polish Financial Supervisory Authority but made it through its registered office in the Netherlands. He recalled that, under Dutch law, there was a dispute between Eureko and the State Treasury concerning the privatization of DAM for years before the Arbitration Tribunal.

According to Bierecki, the recapitalization process may be an explanation for the delay between the prosecutor's interview and notification and the publication of a conversation between Leszek Czarnecki and Marek Chrzanowski. "Perhaps many people play a role in a theater that has been prepared," Bierecki said.

The rapporteur was asked about the constitutional doubts about the amendment adopted in the Sejm by the Legislative Office of the Senate. In this regard, Sławomir Rybicki (PO) pointed out, it is no good to delete this article, especially because it is also in the BGF draft law of the Sejm.

"The accusation of unconstitutionality does not refer to the content of this provision, but to the legislative procedure" – answered Bierecki. "This procedure is evaluated by Sejm's bodies, the commission assessed the material content of the provisions and there was no request to delete this provision, but only to reject the act", – he explained. However, the BFG Act, he added, is not taken into account at the Sejm's ongoing session.

Deputy Finance Minister Leszek Skiba also answered the questions. He argued that an amendment on mergers or mergers of banks is necessary because, at the end of December, the transition period of the EU CRE Directive is over, which implies that banks that do not meet capital requirements and do not join, lose their license and fail. Since the fall, it is better to continue working in a different formula, "he said, adding that the collapse of the bank always causes social problems and undermines confidence in the banking system.

Skiba stressed that the threat of losing licenses concerns several small cooperative banks, "the scale is absolutely minimal," but "it is better to have such provisions." As said, such provisions were in place before 2016, they were replaced by the settlement procedure (so-called forced restructuring). It turned out that both are necessary, so the idea of ​​restoring the old regulations – he added. The Deputy Minister underlined that the proposed provisions are the same as those in the pre-2016 period and were reported as a parliamentary initiative when it was found that the issue of losing a license is real.

In the debate, Bierecki announced that he would propose an amendment that would additionally protect cooperative banks that are not covered by the association. Because in the act "appears as the premise of the lack of association" (bank). "The change consists in excluding the condition of merger of the bank (with another) with the fact that it did not participate in the association", – said Bierecki.

"I introduce him to discuss the issue again at the committee meeting," he added. He stressed that the pretext of the amendment was "the epic of the Polish bank of banks, which, unlike the other two cooperative associations – SGB and BPS – are not covered by the so-called IPS institutional protection system, imposing specific requirements – PAP. did not rule out the fact that the deliberations of the committee would be closed to the public. If its doubts are resolved, he adds, withdraws the amendment.

The opposition also tabled its amendments. Deputy Vice-President of the Senate, Bogdan Borusewicz (PO), said he hoped the government would withdraw from the most critical provision of the act, the amendment that allows banks to take over. "I thought it was a rational way out of this situation," he said.

This has not happened, he added, and "undermines confidence in the system of regulating the financial system". The act in question allows "expropriation" of the banks that will take place, according to Borusewicz, "without rules". According to the vice president of the Senate, this is part of the current government's tendency to "nationalize" everything. The Vice-President introduced a motion for deleting the article in question.

Leszek Czarnobaj (PO) said the Wednesday debate showed "the way the law is made in Poland." "I knew it was bad, but I did not know that," he said. According to Chernobyl, "the world will not collapse, we will pass Smoliński's amendment (as regards the takeover of banks – PAP) normally." However, if the law is adopted without any change, there is a danger that "Wladek and Jurek will meet in the KNF, recognize that they have to take over the zloty for a zloty, and they will." He proposed to reject the draft law in its entirety and, if not, to reject the amendment on taking over banks.

In turn, Senator Aleksander Bobko (PiS) stressed that there are even EU directives in which, if the bank is on the verge of bankruptcy, it can be "expropriated" in the public interest. This, he added, refers to the most controversial article in the law.

Senator Krzysztof Mróz (Law and Justice) argued that the law is for "saving the system and depositors at the expense of the owners." "We need to introduce solutions that allow banks threatened with bankruptcy to be taken over by other banks," he said.

He stressed that the mechanism of taking over the banks in this act existed in the legal system in the years 1997-2016. None of the essentials of these provisions, he added, did not question the outbreak of a conversation between Leszek Czarnecki and Marek Chrzanowski until the outbreak.

"It's not like you could get a bank like this for a zloty," said Mr. Frost. "You can only take banks threatened by bankruptcy, which are not too many and will be taken over by other banks," he added.

In his opinion, opposition senators know this well, but they talk about taking a zloty "because it sells well in the press."

The proposed amendments must be taken by the Senate Committee. Voting on the bill – probably on Friday.

The law on amending certain acts in connection with strengthening supervision and investor protection in the financial market is, according to the justification, aimed at "strengthening the coordination of state policy towards the financial market and early identification of the threats related to its functioning". There are changes in the Act on the composition of the Financial Supervisory Authority and of the organization serving the official commission, which involves the creation of the Fund for Financial Education and Bonds.

The act assumes that the composition of the Commission will be extended to include a representative of the Prime Minister, Minister-Coordinator of Special Services, as well as the Presidents of UOKiK and BFG.

According to the document, the KNF Office will become a state legal entity. There will also be a change in the method of financing the PFSA and PFSA Bureau, which will allow the commission to manage funds more efficiently. The KNF and PFSA bureaus will be funded directly from fees paid by supervised entities on the financial market and not so far from contributions, but also from the state budget (PAP)