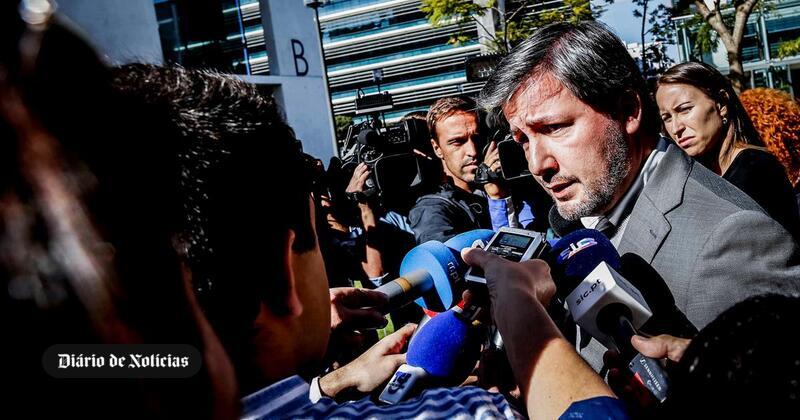 Bruno de Carvalho was detained on Sunday in the police investigation of the invasion of the Alcochete academy. Also, cheerleader Juve Leo, Nuno Vieira, known as Mustafa, was detained, confirmed DN with a judicial source.

Bruno de Carvalho was arrested at his Lambert farm in Lumiar, where authorities searched on Sunday, accompanied by the former leonine president, who was detained at the end of the night. According to former lawyer José Preto, who spoke with RTP, the computer of Bruno de Carvalho's daughter was confiscated. Other electronic devices have also been seized, tablets and the former president's mobile phones.

The searches also took place at the Leonina youth club near Estádio de Alvalade, they confirmed DN with a police source.

Subscribe to newsletters Daily News and receive the first information.

It was there, in the area known as "A Casinha," that Mustafa was detained, who remained under a strong police force already around 21.30, encouraged by several cheerleaders who accompanied the search abroad – while the stadium was played by Sporting and D. Chaves, where the cheerleader was not present.

Bruno de Carvalho and Juve Leo's leader are expected to spend the night in prison at the GNR headquarters and only months after they have to be heard by the court magistrate of the Barreiro court. Mustafa will be taken to Pontinha, where the GNR special intervention department is located.

Arrest warrants were issued by the Criminal Investigation and Criminal Intelligence Unit in Lisbon. The Prosecutor General's Office has already confirmed arrests in a note published this afternoon: "In accordance with the provisions of Article 86 (13) (b) of the Code of Criminal Procedure, it is confirmed that two arrests were made in the scope of investigation into the aggression of the CSP academy in Alcochete. Detainees must be properly present in front of the training judge for the enforcement of coercive measures. "

into the the cause is the events of May 15, when a group of people invaded the Sporting academy in Alcochete and attacked players and coaches. That day, 23 people were detained, which was extended in the coming weeks, reaching a total of 38 inmates. All these suspects were placed under preventive arrest by court order, because of strong suspicions of terrorist crimes, kidnapping, physical infractions, among others.

These events, in the week that led to the Portuguese Cup final, in which Sporting lost to Aves, led to Bruno de Carvalho's fall from the club's leadership. He was removed and prevented from reapplying. The moral authority of this criminal action has always been under discussion, with the former leonin president's responsibility being questioned.

The arrests of Bruno de Carvalho and Mustafa, the head of Juve Leo, are part of this process and, if the former president is accused of the moral authority of crimes such as terrorism, preventive detention must be requested by the prosecutor's office and it is a strong possibility of being confirmed by an investigative judge. The other 38 detainees are detained in custody, with the Lisbon Court of Appeal confirming in several judgments the legality of this coercive measure.

Bruno tried to be heard at DCIAP

Just one month ago, on 11 October, Bruno de Carvalho went to the Central Investigation and Criminal Action Department (DCIAP), expressing his desire to make statements following "rumors" that his imprisonment was imminent, demand for was submitted to the DIAP in Lisboa, where the Alcochete attack on May 15 is being conducted.

At that time, Bruno Jacinto's liaison officer with supporters will help speed up the investigation by GNR, Jacinto's lawyer stating that Bruno de Carvalho should be in prison. Bruno Jacinto was the one who called the Alcochete Academy a few minutes before the invasion of the fans who attacked players and coaches, warning of it.

"We are not talking about detention at all. Stop with these killer fantasies, completely disturbing, absolutely irresponsible." The request made by Dr. Bruno de Carvalho was to make available to the Prosecutor General's Office that it was useful. There were rumors that an arrest warrant was being prepared. It is not confirmed, nor is it confirmed that we are both here, "the lawyer said at the time of the former president of leonine, José Preto.

The balconies reduced the privileges of Juve Leo

After the incident at Alcochete, Youth Leader Leonardo Mustafa said in a statement that he was not approved by President Bruno de Carvalho for the cheerleader for any action against the soccer team of Sporting and informed that an internal process would be in place to determine the degree of involvement of cheerleaders in the invasion of alcohetes.

"As a sportsman, I condemn the acts practiced and, according to the conclusions of the investigation, disciplinary sanctions will be applied," Mustafa said at that time.

Juve Leo's relations with Sporting's leadership have changed recently since Frederico Varandas's election as president. The new leonine leader reduced cheerleading privileges, especially financial support, and forbade Juve Leo to travel with players from abroad, as was the case before.

The division between Freerico Varandas and Juve Leo was evident in Sporting's last move to London against Arsenal, the president refusing to greet Mustafa and cheerleader to leave the heart of London in protest over the balconies.

Confirming Bruno de Carvalho's involvement as a moral author of the attacks on the Alcochete academy in May, this is a coup which may be damaging to Sporting in ongoing lawsuits against players who at the time renounced the alleged case .

Athletes will be able to see strong arguments that have prompted them to engage with the club at a time when Sporting still has cases in hand, such as those of Gelson Martins, Podence and Rúben Ribeiro. The case of a bigger financial impact is that of Gelson Martins, who signed for Atletico Madrid and for which Sporting is trying to be repaid with a sum of between 20 and 30 million euros.

The former president's detention may also speed up the outcome of the ongoing disciplinary process to expel Bruno de Carvalho.