African stolen art: "It's not about emptying French museums" 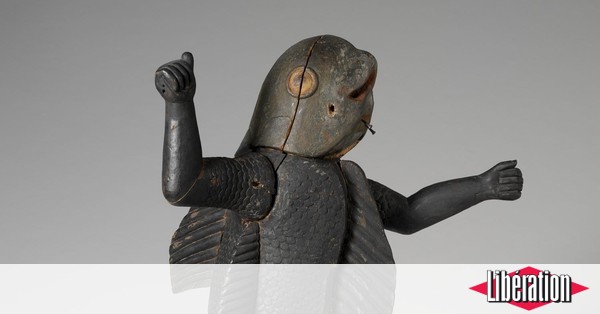 In their report on "the return of African cultural heritage to a new relational ethos" made on Friday, the two authors plead to pave the way for the restitution of African artworks. Historian Bénédicte Savoy is divided between the Collège de France in Paris, where he holds the international chair "The Cultural History of the Artistic Heritage in Europe (XVIII-XXe centuries) and Berlin, where he teaches the history of art at the Technical University. Felwine Sarr is an economist and taught at Saint-Louis University in Senegal, but he is also an editor, musician and writer. He is especially the author of a noted essay: Afrotopia (Philippe Rey, 2016). They say release how, without prejudice, they started from the history of objects preserved in France to tell the story of a patrimony.

Why write a report on the restitution of African works?

Most researchers believe that 85 or 90% of African heritage is outside the continent. It is a worldwide anomaly. No other continent knows this situation. There are works everywhere in Australia, Latin America, Egypt, Greece … In Africa, it's hard to see anything. This exception justifies a rebalancing of African geography in the world. It is not a matter of punishing some and giving them everything to others. But the African young man has the right to his patrimony. Africans do not even have access to the ancestors' creativity. Reconnecting to this cultural history is also an impetus for the future. The African heritage has fueled a whole European artistic avant-garde – Picasso and surrealists, not to mention all the young European artists or designers who can eat today at the museum here and elsewhere.

The issue of restitution is an old story that begins with independence. African requirements are multiple. What is curious is that in the '80s European societies were in the same mood as today: I was very close to a restitution of works due to the tenacity of the new independent and to Unesco. This moment has been completely forgotten, however, and we are "rediscovering" this question today. The report will not "give ideas" to African countries, they have been running for a very long time. But the various requests made in the past have not been heard. This has discouraged other countries from engaging in proceedings.

What does it mean for a country to have been deprived of memory for a hundred and fifty years?

We ask the patrimony to be captured as a weapon of war or a dehumanization weapon. In some countries, the memory of losses is still alive because it is linked to the end of an empire or violent military action. We should specify this acquisition method in museums, for example in cartels. There is amnesia over these issues. From one country to another, the memory of loss is very variable. What is the return of objects I have never seen? Symbolic distribution is crucial.

We also figured out the loss compensation issue. Always starting from objects. Some of them are indeed more than objects, they are subjects who act, possessors of energy, beliefs … This sacred value is often permanently lost, irremediable. It's an immeasurable, immeasurable loss. We therefore think of a symbolic repair, not necessarily financially quantifiable, but which allows a more equitable and respectful relationship to be established between Africa and Europe.

Are you afraid of controversy?

Of course, we are aware that the debates will be heavy, that there may be some reinforcement at the time of handover. But we have succeeded in fulfilling our mission in serenity and dialogue. We were anxious to do this in a very meticulous way, not in a controversial way. We had no prejudices. Starting from their objects and history, we put our finger in the colonial context on a cultural exploitation system that has been added to the natural resource exploitation system. It is a scientific work, I have done a work of historians. We do not position ourselves morally, but historically on the path of things. And on the history of the symbolic and real violence of this patrimony.

Should we not work to make sure there is a trace of crime in France?

It's not about emptying the French museums, so there will always be many works to testify about this heritage capture history. But we also need a real job in terms of departures and returns. The history of the constitution of these collections must appear in museums at the same time as the works. The museums in Nantes or Angoulême have already begun a great work in this area.