In Grand Canyon they found traces of an unknown ancient reptile 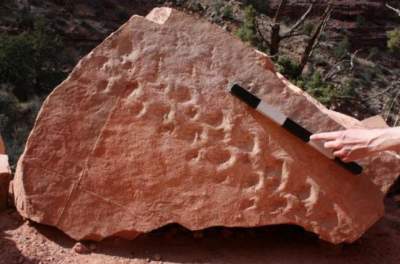 The unknown reptiles lived on Earth 310 million years ago.

Researchers noted that the set of traces stretches across the unusual meter and way – diagonally. Traces belong to the Carboniferous period, when the Earth was inhabited by plant gimnosperms and the first reptiles. The pieces look like two lizards went side by side. But lizards do not go together, it does not happen "- said Professor, University of Nevada, Stephen Rowland.

Scientists have presented some choices of movements that would leave such strange prints, if an unknown reptile that struck with purpose. It could be, for example, the side wind: if it were strong enough, it could cause the animal to move diagonally. Another option – a strong inclination, which was then also surface crushing animals when walking. It is, however, possible that traces remain in competition with the enemy or a kind of ritual to attract a partner.