Progressive Slovakia has introduced candidates to the European elections: they are extremely important to them 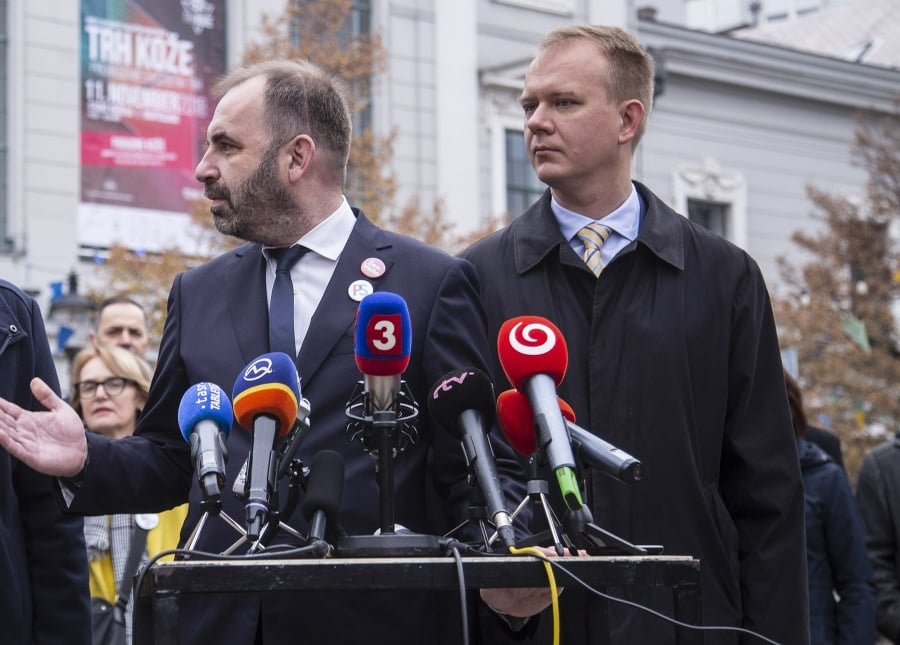 "The choice is clear, on the one hand, of the movements that want to divide and weaken the European Union, on the other hand, the progressive forces that want to push the Union towards the future. This is also in the interest of Slovakia, we must be a full member who not only accepts decisions but also actively constitutes them " and Šimeček said. It is also important for the Union to have real tools to protect liberal democracy, the rule of law and human rights. "These values ​​are now threatened. The EU must be a global power to protect its citizens in this uncertain world, that's exactly what we will do," he said. and Šimeček said.

Asked about how they will vote on Hungary, Šimeček confirmed that he would vote for the launch of Article 7 because Budapest violates in many respects the values ​​the Union represents. "It is also important for Slovakia. In a similar situation, we can not say that our democracy is stronger than any other" he said. At the same time, however, he added that he does not consider the departure of Hungary to be real. "It is our neighbor, whether Viktor Orbán or someone else, the stability of the region is important to us. But the Union can not afford to have any of you who violate its values" Šimeček explained.

If he comes to the European Parliament, after five years of activity, he would like to see that he has contributed to a stronger and more stable Europe. "I would like the EU to have a truly common security policy, to have deployable churches and want citizens to feel safe in the EU" he said.

Zora Jaurová worked in European structures before Slovakia entered. "We have seen the times when we have tried to prove that we are an equal partner. We have seen the times when we did it" she said. He recalled that he was part of Kosice's cultural city project and experienced the way the EU has specifically changed the face of the city. He reminded that Slovakia experienced how the international scene helped us get out of something that could end in totalitarianism in the 1990s. "The argument for joining NATO and the EU was very important and contributed to change. Today it is much more complicated in Hungary, but I think that if the EU does not launch the mechanism and it will not show that it is doing something, it will weaken the EU" Jaura said. Slovakia sees it as an integral part of Europe. "The values ​​of democracy, human rights, stability, the absence of war are not obvious and are not due forever. We can lose them quickly and easily" she added. Europarlamma would like to address the problems of European culture and identity, which is often the opposite of national identity today.

Martin Hojsík pleads for the idea of ​​a strong and ecological Europe. "I managed to change my laws in Slovakia and the EU but I remained faithful in Slovakia, I live with my family, I am not indifferent to the way the landscape will look in the future" said about his motivation. Hojsík has worked for Greenpeace International, wants to fight against plastic, for cleaner air and water, but also for animal husbandry. They believe that these problems can not be solved by the countries themselves, but only together. There are a lot of challenges to the environment and the fight against climate change and it is extremely important to fight for a cleaner and greener Europe for us and our children, he explained.

Elections to the European Parliament will end in May 2019. Not only the new plenary, but also the European Commission. It is currently debating who will run the European Executor. The principle is that the head of the Commission will have a fraction that receives the most votes in the EU, the principle called the Spitzen Candidate. He also has many opponents. Most of the people are Manfred Weber, socialist Frans Timmermans. In the ALDE, Šimečka is still debating whether they will have a leader or another and discusses the relationship they will have with the French President Emmanuel Macron's En Marche Movement! "We will say that the President of the Commission is a person who has a charisma, is a leader, has experience and a political weight, is pro-European and is not an unimportant official." concluded Michal Šimečka.