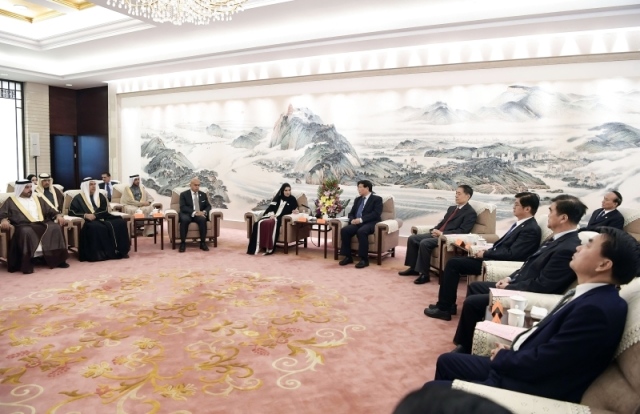 During his meeting with Liu Jian, Chairman of the Jiang Su Provincial People's Congress Standing Committee, Dr. Amal Abdullah Al Qubaisi discussed ways to strengthen parliamentary relations between the two Councils in order to achieve cultural and cultural communication and the development of relations in all sectors. At different levels.

At the meeting, which is part of the official visit of the delegation accompanying the People's Republic of China, its Excellency stressed the importance of strengthening joint cooperation at work and parliamentary and legislative level in international conferences and forums and strengthening political and diplomatic relations. It also took note of the role of the two Houses in international fora and their positions in support of issues of common interest, in particular the promotion of international peace and security.

He said the province of Jiang Su is one of the most advanced provinces in China and is the first in terms of size and size of the population, equivalent to 10% of China's total economic dimension. It is considered an important and advanced basis in many areas, especially technology and education. The number of universities and institutes reached 176 universities and institutes.

His Excellency Dr. Amal and the accompanying delegation visited the Great Wall of China, one of the main landmarks in the history of mankind, during his official visit to the People's Republic of China, which began last Saturday.

Her Excellency, tour and delegation accompanying the Council to parts of the fence, which has been built in stages over two thousand years and extends for tens of thousands of kilometers.

And they listened to Chinese officials to explain the definition of the fence and the history of the construction and of the most important monuments contained in the wall of castles and watch towers, noting that the construction of the Great Wall was on different lands and that it passed through the mountains and the desert and cut rivers According to their topography.

After his visit, His Excellency made a speech in the ceremony registry which expressed her happiness and was a member of the Federal National Council delegation to visit the Great Wall of China, one of the seven wonders of the world, with its historical and cultural characteristics have stretched over more than two thousand years. It is a rare project in the history of human architecture.

The Standing Committee of the House of Chinese Representatives of Jiang Su Province held a dinner in honor of Dr. Amal Al Qubaisi, President of the Federal National Council and the accompanying delegation. His Excellency the Council delegation was received by Wei Ju Kia Ng, Vice Chairman of the China House of Representatives Standing Committee, Jiang Su Province, City Leaders and a number of Provincial MPs.