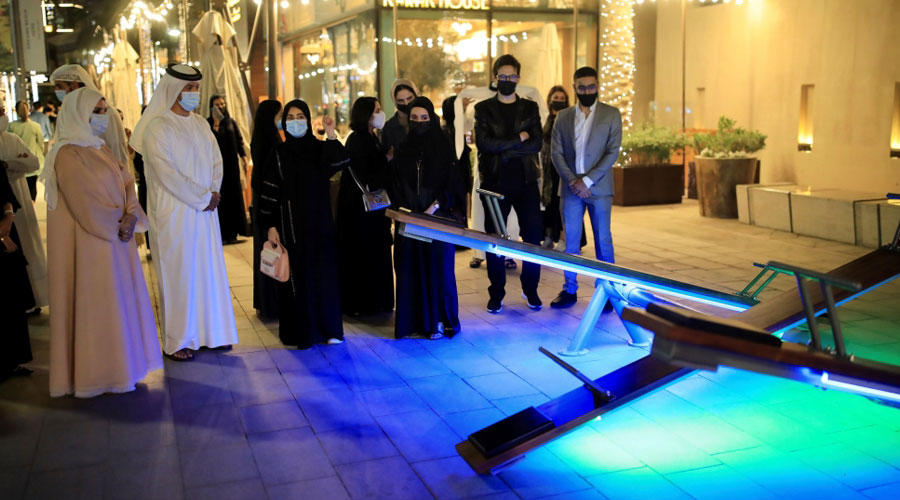 Dubai: “Gulf”
The streets of Downtown Dubai shine with stunning lighting that takes residents and visitors to the city on a captivating journey of light and discovery as part of the neighborhood project, established in partnership with the Dubai Culture and Arts Authority (Dubai Culture) and Emaar during the Dubai Shopping Festival.
The project includes a group of innovative and sustainable lighting models that took four months to prepare, and this project helped add more vitality to Sheikh Mohammed bin Rashid Boulevard in front of the Address Downtown Hotel with specially installed lights and intelligent use of shading technology.
The neighborhood project was officially inaugurated on Thursday night by Hilal Al-Marri, director general of the Dubai Tourism and Trade Department and Dubai Festivals and Retail Corporation, and Hala Badri, director general of the Dubai Culture and Arts Authority ( Dubai Culture), and this concept emerged through a common idea. Between Dubai Festivals and Retail Establishment and “Dubai Culture” aims to create an independent lighting project in one of the famous destinations in Dubai and during one of the biggest annual events.

The neighborhood project was inspired by urban planning and local characteristics that characterize traditional emirate neighborhoods. The presentation of the project was designed using lines of light that form boundaries – visually and metaphorically – between local and architectural activities.
The project draws its concept from the rich heritage and history of emirate homes, traditions and culture, even as Dubai seeks to make more progress in modern life and adopt the latest technologies.
Dubai Shopping Festival is known for its continued support of local businesses and the city’s retail sector through a number of events, such as the neighborhood project, which is a new and creative trend to highlight the work of emerging artists and the integration of traditional activities. and contemporaries from the United Arab Emirates during the events offered by the festival.
This art installation guides visitors through lights and shadows, inviting them to cross a set of visible and implicit boundaries to explore new points of attraction and features as they wander the lively street.

The neighborhood is the first such lighting project to be carried out in cooperation between the Dubai Festivals and Retail Establishment, the Dubai Culture and Arts Authority (Dubai Culture) and Emaar, where seven of the most prominent creators in the UAE, including emerging emirate talent, were designated to produce the lighting structures for the project. , To be displayed during the festival.
The neighborhood project was conceptualized and designed by Rawda Al-Sayegh, Yara Manla, Raghd Al-Ali, Fatima Al-Awadi, Iman Al-Rahma, Ahmed Jeissah and Abdullah Khoury. The group, which includes disciplines such as multimedia design, photography, architecture and product design, has successfully combined its various talents to complete the project.
The seven people were chosen especially for their diverse multidisciplinary skills, in addition to their wide participation in the Dubai art scene, as they began laying the groundwork for the recently renovated Al Safa art and design library in the Al Safa area; One of the oldest neighborhoods in the city that inspired this work of art, due to its unique nature.
The team was able to overcome the challenges of the Covid-19 pandemic in the process of discussing ideas and joining forces, as each team member contributed their own unique skills and experiences during the design and implementation process.
The neighborhood project is a dynamic and artistic experience that moves visitors through the Downtown Dubai area through a series of lighting installations.

The project consists of six components that complete the traditional scene of the Emirate district, including: the railway, the majlis, the mosque, the Hawi (house yard), the grocery store and the market. These six elements have been interpreted in different ways:
** Sikkah: a small alley that connects houses in traditional emirate neighborhoods. Photosynthesis translates the experience of the track into a path with reflective birds, perched above the light poles.
** Majlis: an essential space in every home in the United Arab Emirates, where family, friends and guests gather around a central table. This composition highlights the main elements of the majlis, such as the coffee table, cups and seating pillows.
** Mosque: the mosque where people from the neighborhood gather to pray. Photosynthesis consists of arches representing a mihrab, indicating the direction of the qiblah. The layers of the arches diminish in size, forming a kind of spiritual path.
** Al Hawi: the traditional court in the United Arab Emirates, which is considered the heart of the house. This area is located within certain boundaries, and in the middle is a Ghaf tree. Photosynthesis involves birds, colored lights and swings hanging from the tree to represent the various activities that can take place around it.
** Food: a one-stop shop where neighborhood residents of all ages go to buy groceries. Photosynthesis uses layered panels, with pendant lights representing shelves and bottles that mimic the atmosphere of the grocery store.
** Square: a playground located between houses and alleys in the United Arab Emirates. The lighting embodies several games as a backdrop for the neighborhood on the other side of the street, making the stadium one of the most important sites for photographing residents and visitors.
The neighborhood project was launched as a result of a thought process to study the need for more sustainability and recycling, as the world became more aware of these two issues, with the emergence of the need to reduce waste and reduce excessive consumption in during the Covid-19 pandemic.
The fully sustainable neighborhood project uses recycled and reused lights from previous sessions of the Dubai Shopping Festival, where the lights used in the hall came from the old palm trees and were distributed throughout the city, while the birds used on the way came from structures and old lighting fixtures. .
The lights of the neighborhood project will be turned on daily at sunset until January 30. The neighborhood is one of the many events in the Dubai Shopping Festival, organized by the Dubai Festivals and Retail Corporation. Dubai residents and visitors can enjoy this wonderful event for free at the beginning of the new year.