Poroshenko did not accept General Prosecutor Lutsenko's statement on his resignation 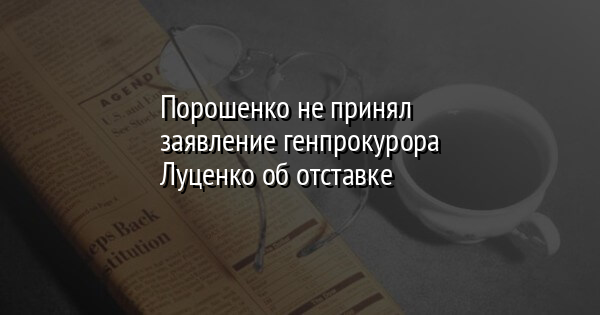 The President of Ukraine refused to reject Yuriy Lutsenko. Previously, most deputies in the Rada intervened against the resignation of the Prosecutor General of Ukraine. President of Ukraine Petro Poroshenko did not accept the resignation of the country's general prosecutor, Yuri Lutsenko. The head of state "made the statement of the Prosecutor General, given that Yuri Lutsenko received a vote of confidence in parliament," Interfax-Ukraine said in a press service of the Ukrainian presidential administration on Friday 9 November.

November 6, Lutsenko said at a meeting of the Verkhovna Rada of Ukraine that he would write a resignation letter and will give Poroshenko. The Prosecutor General has declared he no longer wants to get involved in the work of law enforcement agencies in the context of the scandal provoked by the investigation of the murder of civilian activist Yekaterina Gandzyuk.

The next day, the general secretary's press secretary, Larisa Sargan, reported that Lutsenko had sent a letter on the resignation of Poroshenko.

Attack on the counselor of the mayor of Herson

Ukrainian law enforcement agencies have repeatedly heard allegations of delaying the investigation of attacks on public activists. The death of the councilor of the mayor of Herson and a public figure, Yekaterina Gandzyuk, who accused representatives of local authorities and law enforcement agencies, caused a considerable resonance. At the end of July 2018, in Herson, an unknown person filled it with sulfuric acid. Gandzyuk received chemical burns of over 30% of the body, suffered numerous operations, but died on November 4th.

This news is also on the Deutsche Welle website.