Russia's Aggression in the Azov Sea – Chronicle of Online Events 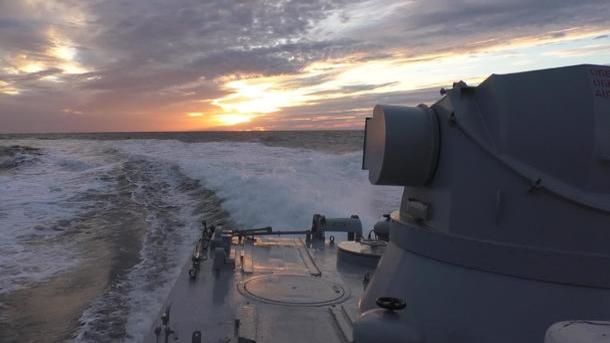 In the Azov Sea on November 25, it took place A Russian attack on a group of Ukrainian warships – a raid tug "Yani Kapu" and two small artillery boats "Berdyansk" and "Nikopol" were captured by the special forces of the country of the aggressor.

To your attention Chronicle of online events:

9:54 Three more countries condemn Russia's actions to take advantage of the Ukrainian ships in the Azov Sea. The foreign ministers of Estonia, Denmark and Romania have called on Moscow to comply with the rules of international law.

9:37 This has become known captured on the Azov, Ukrainian ships set in Kerch, there were photos and videos of damaged ships that were forced to tow in a busy Crimean city. Genmola attached Berdyansk artillery artillery artillery, raid tug Yana Kapu, and IBAK "Nikopol" that had descended under its own power.

9:23 immediate The Naval Navy has brought a full alert, and the navy ships, based in the port of Odessa, left the port and sailed. Sailors raised in alarm, half the night with the equipment gathered at the bases. In addition, in the southern operational command building, the soldiers are in the charge of an armored carrier, and the legislators in Odessa have gone to a consolidated regime.

8:48 Because of Russia's aggression on Azov, Verkhovna The Council must approve the martial law. The sitting of Parliament will start at 16:00 and will take place behind closed doors.

8:33 National Bank of Ukraine said that martial law will not affect the banks, and the head of the NBU, Jacob Smoliy, at a NSDC meeting assured the Ukrainians about the activity of the banking system.

8:22 The representative of the occupation authorities, the so-called General Manager of the company "Crimean Sea Ports" Alexei Volkov, said that Kerch Strait was opened for the civil courts.

8:02 US Permanent Representative to the UN, Nikki Haley, said that UN Security Council to hold an emergency meeting on Russia's aggressive actions against Ukraine in Azov.

7:39 it appeared Poland's response to the aggression of Russia in the Azov Sea. Warsaw is confident Moscow is guilty of escalating tensions in the waters of the Azov Sea because it violated the basic principles of international law. In particular, we are talking about the violation of the territorial integrity and sovereignty of Ukraine by the Russian Federation.

7:02 Armed Forces of Ukraine I'm in full alert. This was done on the basis of the decision of the National Security and Defense Council of Ukraine on the introduction of the legal regime of martial law.

6:37 Coordinator of the "Resistance to Information" group, People's Front People's Deputy Dmitry Tymchuk said The aggressor moved into the active phase and named two reasons for Russia's challenges in Azov. The politician also explained why the Kremlin decided to "sneak" into Azov right now.

5:41 Chief of Staff of the Armed Forces of Ukraine Victor Muzhenko said details of the Russian attack on Ukrainian ships in the Kerch Strait. According to him, the armed forces of the Ukrainian Supreme Court were dismissed when returning to Odessa without receiving information about the possibility of passing under the Kerch Bridge.

5:28 Ukrainian government chief Volodymyr Groysman suddenly reacted to the Russian attack on the Azov Sea and said this wilderness must put an end to it. In addition, he considers that it is necessary to mobilize all the defense possibilities of Ukraine.

04:52 – SBU is in full combat, counterintelligence activities have been consolidated in the country.

04:36 – The Foreign Ministry of Ukraine expresses a categorical protest Of the Russian Federation in connection with the armed attack and confiscation of the Ukrainian military craft Berdyansk, Nikopol and the tug Yana Kapu, as well as the injury and captivity of their crew members

04:28 – Russia will send ships owned by the Ukrainian navy in the port of Kerch.

03:49 – Turchinov said that, in case of normalization of the situation in the country, the legal regime of the martial law can be canceled at any time.

03:34 – The fate of 23 Ukrainian sailors of the ships captured by the Russian army is unknown

02:29 – The EU and NATO demand Russia Do not worry about the situation in the Kerch Strait.

02:12 – President Peter Poroshenko asks the Verkhovna Rada to consider at an extraordinary meeting on Monday, the decision to impose martial law in Ukraine.

01:45 – In the case of the introduction of martial law, the activity of the banking system in Ukraine will not be violated. This was stated by National Bank President Jacob Smoliy at a meeting of the National Security Council.

01:12 – President of Ukraine Peter Poroshenko said he supported the proposal of the Military Committee on the introduction of martial law due to the attack on Ukrainian ships in the Kerch Strait.

0:47 – At the meeting of the National Security and Defense Council of Ukraine decided the imposition of martial law in Ukraine. The decision was taken on the actions of the Russian Federation in the Azov Sea.

00:34 – The experts explained what the consequences can bring about a possible introduction of martial law. In particular, Ukrainians can expect a restriction of a number of rights and freedoms.

00:15 – Live webcast emergency meeting of NSDC on the situation in the Azov Sea.

00:08 – into the the Russian embassy in Kiev has gathered a spontaneous protest: the participants brought paper boats and car tires.

23:43 – In the Federal Security Service Russia has confirmed the bombing and detention of Ukrainian warships. At the same time, the Russians said that the Ukrainians would have "made another attempt of illegal actions"

23:36 – At an emergency meeting NSDC will consider the issue of martial law in connection with the events in Azov.

23:29 – Vice President of the Irina Supreme Rada Gerashchenko reported on the situation of injured Ukrainian sailors.

23:16 – Escalation to Azov Sea has become the main theme for social network users.: The Ukrainians actively expressed their anger, and the volunteers recalled the army's help.

22:43 – Ukraine meets emergency meeting of the UN Security Council due to the worsening of the situation in the Azov Sea.

10:39 p.m. – Into the During the attack, the Russians were injured six Ukrainian sailors. Two of the captured ships, invaders lead in tow, and another is blocked and escorted by the invaders.

22:26 – The FSB of Russia said that "put on the opposite course" three Ukrainian ships destined for Berdyansk in the direction of the Kerch Strait.

21:58 – President of Ukraine Peter Poroshenko has gathered an emergency meeting of the National Security Council on the situation in the Azov Seaand instructed diplomats to inform the G-7 countries, the European Union and NATO about it.

In turn, Prosecutor General Yuriy Lutsenko said that the GPU, together with the Security Service of Ukraine, have begun investigating aggression. He said that the ram of the Ukrainian Russian ship is an act of aggression.

9:06 p.m. – Ukraine is preparing an appeal to the UN Security Council about the attacks of the Russians in the Azov Sea. "The defiant behavior of an aggressor can only be stopped by jointly coordinated efforts!" – wrote the representative of Ukraine within the organization Vladimir Yelchenko.

8:45 p.m. – The Russians opened the fire on the defeat of the Ukrainian boats in the Kerch Strait. The Berdyansk Artillery Boat was damaged and a Ukrainian sailor was injured.

8:21 p.m. – Russian FSB vessels have been following Ukrainian ships, demanding the stop and the threat of using weapons. on one of the ships was transferred to the special forces that were preparing for boarding.

The attack started with the Ukrainian tug ramen by the "Don"belonging to the Federal Security Service of the Russian Federation, and later it became known that Ukrainian navy vessels were fired, lost their course and then captured. He also reported on the wounding of two Ukrainian Armed Forces sailors.

It was later video about the moment of the ram, which, according to Interior Minister Arsen Avakov, was intercepted by Ukrainian security forces, who clearly heard how the commander of the Russian ship commanded to go for a collision with a much smaller ship of the Ukrainian Navy.

In addition, according to the Ministry of Defense, during the Russian attack they used military helicopters and aircraft and direct capture was performed by special forces. In turn, the Ukrainian sailors were barricaded in the cabin.

It is noteworthy that FSB said – Ukraine has not coordinated the passage of their ships on the Kerch Strait, which has violated the "state border of Russia," according to which Moscow "takes all measures to ensure safer navigation.

In his turn, Permanent Representative of Ukraine's President of the Autonomous Republic of Crimea, Boris Babin, said that RF frankly challenged the Ukrainian side.

In spite of this The Ukrainian ships still managed to reach the Kerch Strait, which Russia, taking "security measures" blocked for civil courts.

It was also reported that the movement in both directions was stopped in connection with an armored tank. However, this information has not been confirmed – it has become clear that the Russian Federation is deliberately blocking the movement.