The best building in the world? A distant Brazilian School of Wood Art and Design 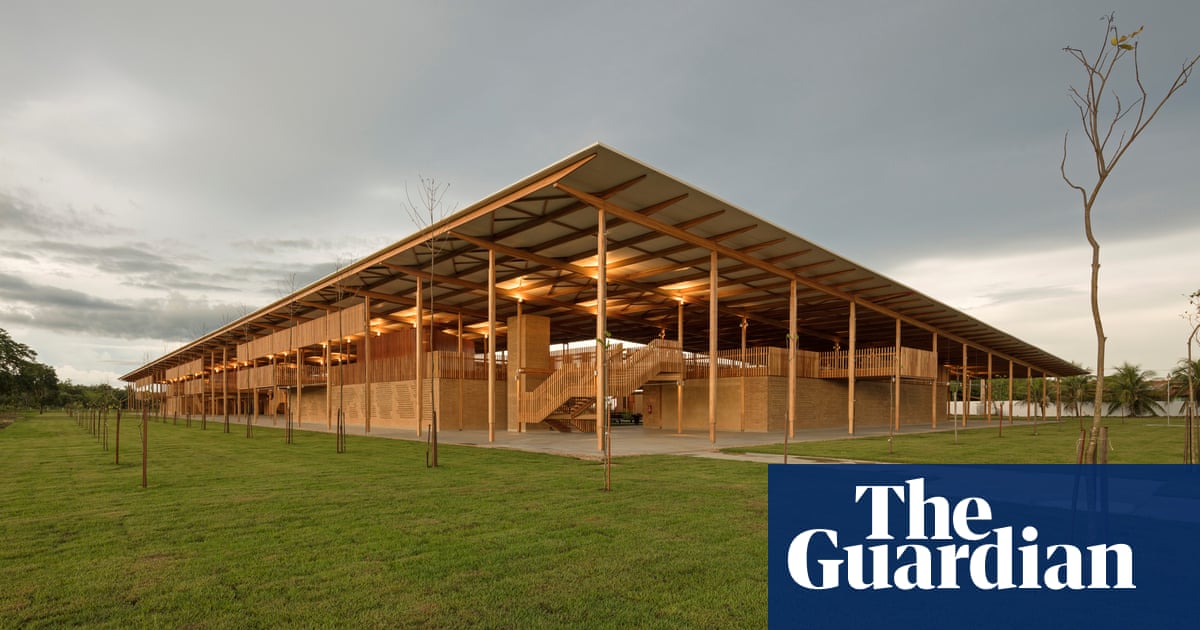 A forest of eucalyptus columns extends inside the expansive dormitory of the Canuan school in northern Brazil, as if the surrounding wood took over the building. Between the trunks that rise, there are clusters of small bricks placed around the open yards, while a thin metal ceiling floats above the whole scene, offering a merciful shadow in the suffocating heat.

This is the children's village, designed by young architects Aleph Zero, with designer Marcelo Rosenbaum, the winner of this year's RIBA International Award for the World's Best Building. It is an unlikely recognition of finding a distant school in a remote area of ​​Brazil, designed by a duo in the early 1930s, who built a little more than a few private houses and a few plants before landing this commission.

"We chose the architects precisely because they are not the ones who think they know everything," says Denise Aguiar, director of the Bradesco Foundation, the charitable arm of one of the largest Brazilian banks that originally built the school in the 1970s and operates 40 schools across the country. "We did not know what we needed, but designers seemed to actually listen to what students wanted rather than to impose their own ideas."

The project started with an intense 10-day residence on the construction site when the architects met some of the 540 adolescents they were supposed to design, developing games and workshops to understand how students wanted to live together. The institution is a boarding school by necessity: it serves the remote agricultural region around Formoso do Araguaia, where students travel long with the horse along the unpaved roads to get there. Insulation has also made the construction a challenge.

"We could only carry light materials on the site, so we prefabricated the wood elements, but we decided that heavy materials should come from the site itself," says Gustavo Utrabo, who set up Aleph Zero with his former Pedro classmate Duschenes in 2012. Speaking on the phone from the São Paulo studio, he adds: "The challenge was to convince students and teachers that local materials of earth, bricks and wood could make progress – being modern does not have to mean glass, steel and air conditioning. "

Fortunately, Aleph Zero succeeded. The resultant complex is a light ecological design that provides a huge shadow stretch under which groups of small buildings with perforated walls are arranged to allow natural cross-ventilation. There is no need for air conditioning even at 45C heat. The only complaint the students have done is actually the cold at night, an easy matter to solve with more blankets.

"The main goal of the design was to create a place to feel like a home for the children," says Utrabo. Their previous tasks consisted of overcrowded barracks, sometimes sleeping in the room. The new house offers rooms for six in wooden beds, arranged in beautifully landscaped courtyards connected by a higher level of wooden sidewalks and play areas, creating an airy veranda with the feeling of a meandering tree force. There are two identical buildings, one for boys, one for girls, each stretching 165 meters x 65 meters from each side of the school, now being used in very different ways.

"Girls are more friendly with each other," says Aguiar. "They told me that now they can share their secrets because they live in comfortable groups of six and not 40. They enjoy spending time in their rooms while boys spend their time playing games on the upper decks."

Utrabo reviewed the project a few weeks ago to find that the buildings took their own life. The girls started organizing pilates courses, which they never had space to do before, while those forced to withstand exams can now benefit from more education in the less formal regions of the village than return to school after hours.

The project is the second recipient of RIBA's international biennial prize and continues with a Latin-American educational theme. The award was first awarded for the Greater Grafton Concrete Campus at UTEC University in Lima, Peru in 2016. Procured as the most rigorous architectural awards in the world, the trial saw a jury visit a long list of 30 buildings across the The world's grand jury, chaired by Liz Diller this year, visited the shortlist of four finalists. The village of children beat the competition from O'Donnell & Tuomey's building for the Central European University in Budapest (now threatened by the closure by the right-wing government of the country), Toho Gakuen Music School in Tokyo by Nikken Sekkei and the Bosco Verticale Tree Towers in Milan, by Stefano Boeri.