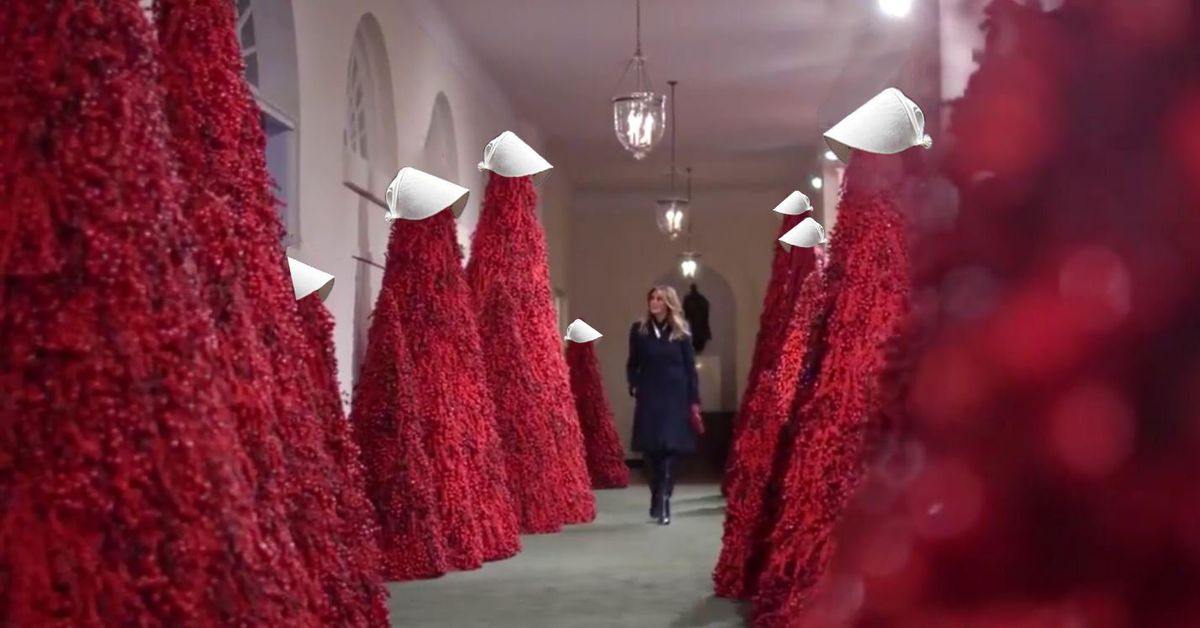 The White House covered its halls for holidays. And, like last year, its garments look more frightening than festive at first glance.

If you were one of the many people who thought the last year's White House Christmas poster was strangely threatening, the moody illumination and the skeleton of the tree burned like a horror film – then, I can not wait to see what do you think about the 2018 holiday look.

Melania Trump spent several months working on this year's decorations, which she discovered in a series of tweets on Monday morning.

And to be fair to the first lady, this year's holiday drawings are much more enjoyable than last year, with lots of color and warmth.

But they failed to avoid the rebirth of the Christmas tree in the White House of the Gospel last year, mainly due to a specific selection of Melania decoration.

Perhaps she is determined to continue to realize her critics, Trump repeated the idea of ​​an Alb-House decoration in at least one corner of that place, lining an entire hallway with bloody red Christmas trees that reminded her immediately gawkerilor on social media fun holiday movies. Like Stanley Kubrick's classic Christmas The shining!

… not to say anything about other stories of joy and delight:

Horror and horror movies The story of the goalkeeper references have reigned, but even the most captivating are dealing with the return of the white Evil House mother, they tend to the dark.

This is a bastard Doctor Christmas, is not it? I'm animatronic muppets on a planet with a super scrabble scrabble.

I'm sentimental polyester that intends to ignite in solidarity with the wild-fire urban interface.

As happened last year, the Gospel White House Christmas memory talks about wider polarization between the public and the presidency and about the sense that the White House itself has become a visual representation of what many people see as real horror outside the Trump administration .

Since Donald Trump has taken office, he has become accustomed to commenting on his administration through horror memories – remember the frightening picture of his Orb poppies? – and now it turns out that turning the Christmas display into the White House in an annual grimoi slowly becomes an unexpected tradition.

And the fact that the White House commenced the annual Thanksgiving holiday for his holiday holiday, while children were tear gas at the US-Mexico border, made the situation even more grimmer for many.

Welcome to Christmas at the House of the Blind

In addition, the inclusion of the Christmas ornaments that reminds the spectator "Be Best" – in support of the first lady's initiative to focus on "the major problems faced by children today" – has hit many as extremely insulting.

You are a mother. And you're an immigrant. What do you think about this #Tear gas being used for women and young children seeking asylum in the United States?

It's time for you #BeBest and speak, #MelaniaTrump

One thing that is strikingly different between the Christmas monster in Evil White House and last year is that this time, no one is making jokes about Melania being "caught" or imprisoned in the White House. The idea that the first lady was somehow a victim of her husband's tyranny may have reigned for much of the first year of the Trump presidency, but her controversial jacket choice in summer, as well as African safari equipment dubiously she chose her as a bastard in her own right.

Consequently, it is perfectly understandable that the culture of meme – which tends to reflect our social and political anxieties – jumped to the chance to revive the memory of Christmas from the White House, but in a darker and sharper way. For many, jokes are almost perfunctory now, and the superposition of the references between Trump's reality actions and horror films feels less ironic and more like a form of mandatory commentary.