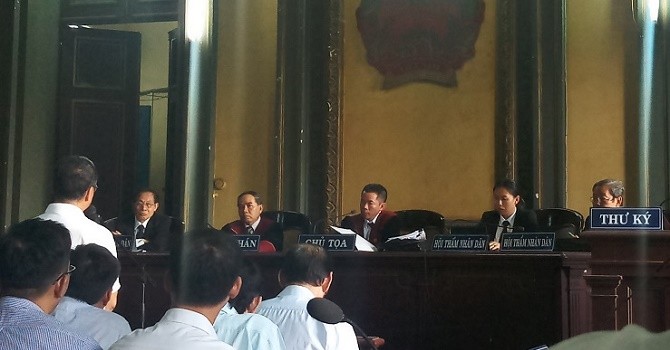 The panel has questioned defendant Huynh Nam Dung, the former chairman of MHB and MHBS. Defendant Dung said the defendant's accusation was wrong.

Specifically, defendant Dung said the allegation accused the defendant through the Alco Council has issued a policy that allows the MHB MHB to transfer money to MHBS with the co-operation of the investment bond government (TPCP) is not correct.

"All minutes, Alco Council resolutions of 4/4/2011 to 6/1/2014, are collected by the investigating agency in the case file. However, there are no Alco Council resolutions, minutes or lines Alco intends only to buy government bonds to liquidate liquidities and allow SGD to transfer money to its MHBS account to wait to buy government bonds and this state-owned bank's assessment concludes that is contrary to the law "The dung mentioned in the question.

"There is no minutes of the meeting, any resolution of the Alco Council finds that I am directing the money for using MHBS. I do not sign any document on the direction of money transfer to MHBS for the purchase and sale of MHB bonds, using the DGS deposit for to save money to transfer profits to MHBS, "Dung said.

The former head of the MHB and MHBS said the Investigation Police Agency did not receive any objective evidence or evidence showing the defendant's direction after three rounds of filing for further investigations. . The implementation of government bond purchase policy, such as money transfer and signing of investment agreements with MHBS, is entirely carried out by DGS through the directing, directing and direct supervision of MHB's General Manager. Follow the Alco guidelines.

Mr. Dung also said he is not a shareholder of MHBS. Mr. Tri's sister, Mr. Dung, bought the shares from the old shareholder and bought additional shares of MHBS with full redemption arrangements. Mr. Dung said that only MHB accounted for 60% of MHB's equity.

In court, Mr. Dung also claimed he does not receive 460 million dong as a indictment. Mr. Dung said there were no documents, documents, receipts showing that he was the recipient. The amount of VND460 million was drawn for operating expenses for the Board of Directors and also represented the operating costs of MHBS, rather than the remuneration of the Council. The running costs of this Board of Directors are court fees that have been included in the operating expenses of the business and have been duly settled annually. So far, there is no document from MHB's parent company or competent authority or management agency requesting this amount.

The defendant father said that the charge that MHBS misused the amount of SGD MHB transferred in 2011-2014 causes damage is not true. And SGD behaved MHB paid the money to buy G-bonds for MHBS and MHBS for a wrong purpose without causing damages of Vdd349 billion, including VND272 billion mainly and the loss of MHBS misuse of funds. VND77 billion.

Mr. Dung said that MHBS's misuse of MHB's money that awaits the purchase of TPC's bonds did not cause MHBS damage, but only resulted in a profit for MHBS. MHBS has not yet repaid the main amount of MHB's VND272bn due to the fact that its clients have allocated capital since 2010 and the reason is that MHBS has not liquidated its assets as securities held to complete the payments to MHB. MHBS is currently in a position to repay this amount.

The president asked the defendant Dung to maintain the motion to suspend the case or not? Defendant Dung answered yes.

Proposal for reassessment of damages

The group will lead the defendants as leaders and employees of MHBS Securities. The defendants disagreed with the conclusions of the assessment. The defendants argued that the damage was not fair because MHBS was able to repay the debt if it sold the securities in the MHBS portfolio.

"Today's meeting, we find that, if there are more circumstances, the needs of the functional agencies, the Valuer is willing to review the revaluation," said the Securities Commission's assessors.

Responding to lawyer Vu Xuan Nam, the price of securities on the floor changes every day on the market, so at this time, if the revaluation will have other figures, the valuer did not respond.

Truong lawyer Thi Minh Tho asked the Valuer in the process of further cooperation with the investigation agency to reduce the amount of damage? The evaluator refused to answer.

"The loss after the payment of additional records fell from VND108 billion to 60 billion VND indicating that the valuation was not correct. I think a reassessment should be made," suggested the lawyer in front of the group.