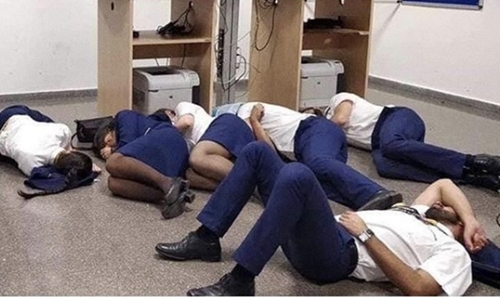 Irish airline Ryanair crew was blocked Tuesday at the airport in Malaga because their flight was hijacked by a storm in Portugal. The company was later criticized as the crew image to sleep on widespread social networks.

The airline then released a video from the surveillance camera showing that six people were moving in a corner in the crew room and then went to bed. A crew member then took a picture.

Ryanair explained that the Malaga hotels did not work because of the holiday season. The airline said the crew stayed for a short time in the crew room before traveling to the VIP lounge at the airport. They returned to Porto the following day and did not work on the return flight.

"All six members of the Porto crew were fired on 5 November for violating contracts due to incorrect actions after having falsified a false photo to promote a false statement widely spread in the international media) that are forced to sleep on the floor of the Malaga crew saloon, "said Ryanair spokesman.

Ryanair described the photograph as "an act that corrupts the credibility and distrust of the employer with these six people."