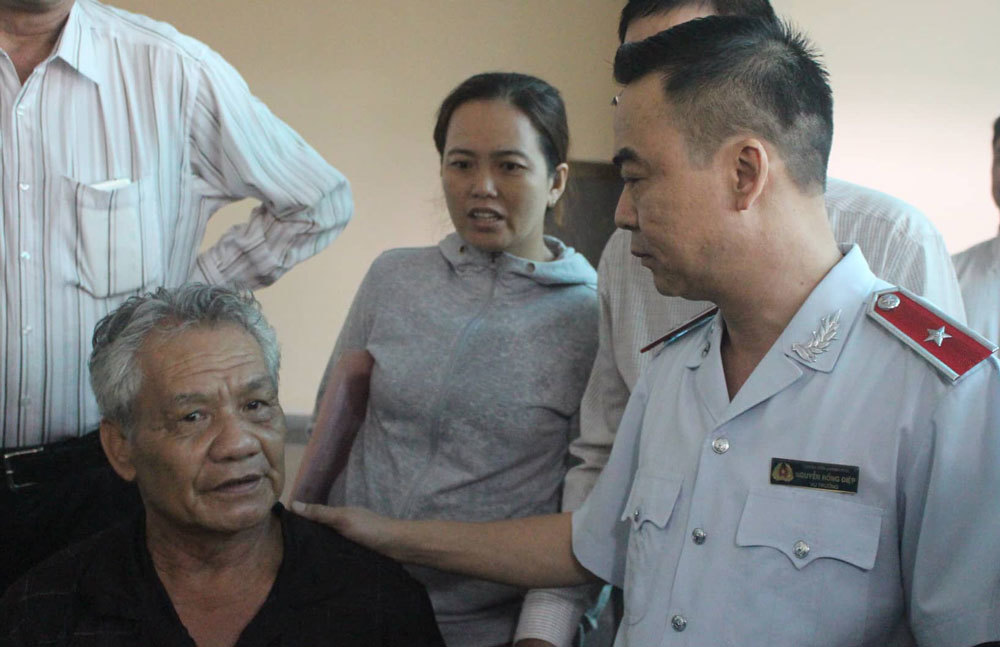 9:45: Mr. Nguyen Van Khuong (from Binh Trung Dong Ward) asked the People's Committee Bureau chief Van Hoan about the content of this speech at a recent press conference that "the 4.3 hectare border was determined."

"Our children ask him to provide all the maps for people to see, whether we are in the planning area or not. In fact, we are not in that direction," Mr. Jiang said.

Mr. Van Hoan said that, according to the State Inspectorate, the city must redefine the limits for accuracy, how to ensure the maximum benefit of the people.

"First, TP took all the maps that were presented to the Government." There are ten pieces to determine Thu Thiem's ​​limits, which are hard to identify, "Hoan said.

According to Hoan, all the maps are the same, just to the limit. There is a total plate, electric system, water system, traffic system. For 20 years, the consultative bodies have a common map to bring out the subject of each planning. Each map of specific planning, with the area of ​​4.3 hectares represented by points, is one of them.

"In the middle of the map of the people and the city, 4.3 hectares can be determined inside or outside the border. At the inspection, the State Inspectorate concluded that 4.3 hectares are out of the border if outside the TP determine it in detail. At this point TP practically realized the limit of 4.3 hectares.This is only the first step when the central agencies based on the legal opinion "Vo Van Hoan said.

9:15: Chairman of the District 2 People's Committee Nguyen Phuoc Hung said, there are 10 content suggestions, the city asked for views.

1. Adjust the time to calculate compensation for Thu Thiem residents, without taking into account when Decree 34 enters into force but until land reclamation.

2. Compensation for land used by the people themselves, cultivation. The level of support for compensation and resettlement costs incurred in 1997.

5. Consideration of support policies applicable to state-owned leasing of land for commercial purposes.

7. The case of residential land is partially liquidated.

8. Cases have been transformed into residential land, but not directly into the house, as a warehouse, stables, etc. Agricultural land not used for housing is also taken into account for adjustment.

10. The land itself transformed agricultural land into residential land before 10 May 2002.

8:50: According to the Chairman of the People's Committee Nguyen Thanh Phong, after the conclusion of the Government Inspectorate, the city focuses on two contents: listening to people's opinions and completing and completing the compensation policy.

With a resettlement area of ​​160 hectares, Phong said the State Inspectorate set up a working group with many ministries responsible for the project.

Regarding resettlement resettlement policy, the city met people in the 4.3 hectare area to complete politics.

"Today there are 10 problems of consulting aunts," Phong said.

The city president then asked the District 2 People's Party Chairman Nguyen Phuoc Hung to announce 10 city contents to consider and supplement support for the people.

However, at this point, people spoke, asking the city to name the minutes of registration.

The residents said they were not in the planning area, and the State Inspectorate's notification of 1483 was not the final conclusion, so there is no legal basis.

Central Committee Receptionist Nguyen Hong Diep said that today he does not need to consider the petition, but to present how to implement the inspection findings.

"If you have comments on the content of the test and what your desires are," he told people.

35/50 households were invited to participate in the room on the 2nd floor. There are many households without invitations, followed by two screens on the ground floor.

This is the second meeting of the City President with the Thu Thiem inhabitants at the end of the State Inspectorate.

After reviewing the full legal status, it is expected that 10 sets of issues will be considered.

On Oct. 18, Nguyen Thanh Phong met about 30 households in Q1, Binh An Ward. These are the cases where the land is located in the area of ​​4.3 ha, identified by the State Inspectorate outside the Thu Thiem urban areas.

The city has proposed a compensation solution to support the conversion of land value for the same purpose. Three adjacent land adjacent to the Binh Khanh Bridge, approximately 18,000 m2, were selected for evaluation as the basis for the swap.

According to Mr. Van Hoan, the city has identified the 4.3-hectare area plan on the map and will consult the Standing Committee of the Party Committee, the Government and the State Inspectorate to agree on the direction. The city then meets with people to announce and mark specific areas, defining the limits specific to each case.

For people in the area of ​​1,080 resettlement apartments are due due to lack of money to buy apartments, have to rent or buy the installments, the chairman of the People's Committee will also have two meetings to exchange ideas.

Regarding the treatment of mistakes by the Thu Thiem team and people, the head of the People's Committee Bureau of the HCMC said it would be completed in November.

President Ho Chi Minh City: From the bottom of my heart, I apologize to the Thu Thiem people

This morning, Mr. Nguyen Thanh Phong, Chairman of the People's Committee of Ho Chi Minh City, met with 30 households out of planning, according to the State Inspectorate's conclusions.

More than 2,000 Thu Thiem families send petitions after the inspection

People in Thu Thiem want to know policies, guidelines and be compensated, to support land outside planning.

Secretary of the People: "Money to build theater 1,500 billion other compensation for Thu Thiem"

The Thu Thiem project is a violation of planning, land acquisition and resettlement

The outcome of the inspection carried out by the State Inspectorate for the Thu Thiem Urban Area Project in Ho Chi Minh City shows a number of violations, ranging from planning to land acquisition and resettlement.