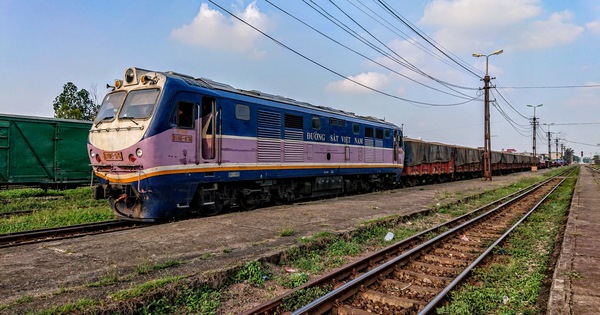 The old and outdated railway infrastructure is identified by the leader of the Ministry of Transport as a congestion point that is not easy to change.

Mr Vu Anh Minh – Chairman of the Board of Directors of the Vietnam Railway Company – said this at the January 8 Conference on this business.

The main reason, according to the head of the Vietnam Railway Corps, due to the COVID-19 epidemic was the decrease in the number of passengers on the train. Then, storms and floods in the Central region interrupted the transport of hundreds of trains. The number of train passengers in a month reached only 30-35% in the same period of 2019, this being the lowest level in the history of the railway industry.

“Due to the COVID-19 epidemic, some major routes serve tourism, but almost no visitors in the last year. Some trains reach only 10-15% of passengers, but still have to run. If this happens in 2021, COVID-19 is the same as 2020, until 2022, both railway transport companies will lose all their own capital.

Thus, it means that the Railway Corporation will completely lose 3,250 billion of equity on December 31, 2022. And if this happens, both the training and development effort will be eliminated within 3 years “- said Mr. Minh.

According to Mr Minh, the railway industry still has difficulties “I don’t say, but everyone knows”, such as outdated infrastructure, the old single 1m gauge line, thousands of curves with a radius of less than 300m, uneven load, over 14,000 locations have were violated, traffic safety, railways were invested in replacing the old, not in creating new products …

The hope of the railway is that this scenario in 2021 will end the COVID-19 epidemic when there is a vaccine and the VND 7 trillion infrastructure improvement project is completed will have better infrastructure to increase transportation capacity, so the railway industry will take place for development.

At the same time, Mr Minh hopes that the restructuring project of Vietnam Railway Corporation will be approved so that it can restructure from finance, investment, science and technology, products and services and restructuring. staff and organizational model for the best possible use of the railway on the existing infrastructure.

According to Mr. Dong, in the past 10 years, the railway has not achieved the goal of mobilizing resources in the development strategy. Meanwhile, investment capital for the railway has increased more than before, but only 4,000 to 4.5 trillion VND, mainly for infrastructure maintenance to maintain train operation, social security, not investment in development. .

Mr Dong said that, in difficulties, the outdated infrastructure is still the agglomeration of the railway and cannot be changed in a short time, but it also requires a process of awareness, investment, management, economic rules. techniques for maintaining investments in railway infrastructure …

The railways have been lost more and more, why?

TTO – Faced with chronic difficulties in old and outdated infrastructure, the COVID-19 pandemic and the continuous floods in the central region have caused the railway industry to suffer. Many people fear that the railway will fall into a dark year in its history.